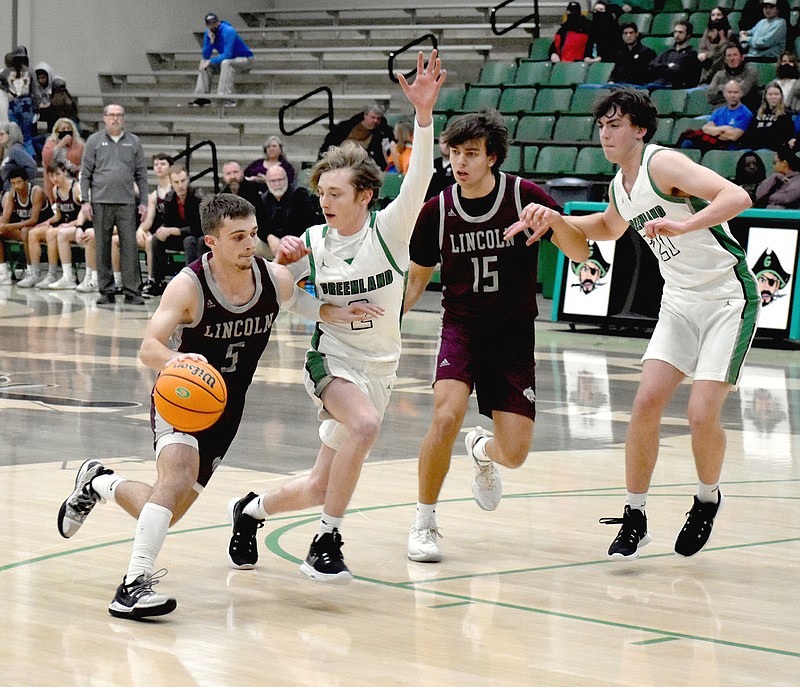 GREENLAND -- Lincoln jumped out to a 14-0 lead and played well down the stretch in knocking off Greenland, 59-49, in a 3A-1 Conference boys basketball game Friday.

Lincoln coach Tim Rich liked the manner in which his ball club worked their offense to get high percentage looks at the basket. Kyler Calvin scored 27 points while Trey Reed finished with 13 points and Jace Birkes had 11.

"We did a really good job tonight of attacking the basket and not just settling for that outside shot. We had multiple people just taking it in and going up strong with the ball," Rich said.

The contest featured a scoring duel between Greenland's Jacob Gilbert, who made a pair of 3-pointers and 7-of-8 free throws to lead all scorers with 29 points, and Lincoln's Calvin, who also recorded 10 total field goals, three of which came beyond the 3-point line and scored 27 points.

Reed came out hot scoring the first 10 points of the game on a pair of treys plus two layups off a steal and handoff while cutting the lane. Calvin added another steal and layup and the Wolves owned a 14-0 advantage forcing Greenland to play an uphill battle.

The Pirates warmed up in the second quarter with 18 points behind a dozen points by Gilbert. The Wolves offset that with 14 points featuring Calvin with nine points including a pair of trifectas and an old-fashioned 3-point play. Sophomore Jace Birkes chipped in a three helping the Wolves maintain a 28-2o halftime lead.

Lincoln led 39-27 with three minutes remaining in the third with Calvin driving the length of the court and finishing with his left hand. Greenland rallied with seven unanswered points capped by Andrew McArdle's layup to complete a Pirate fast-break. Calvin broke the run with a much-needed basket for the Wolves when he squared up off the dribble to knock down a shot with 2.5 seconds left in the period putting Lincoln up 41-34 going into the fourth quarter.

Greenland trimmed the lead down to 43-40 on a free throw at the 6:16 mark and twice pulled within four points after that. Lincoln answered both times with Jace Birkes scoring off a back cut on an assist from Calvin and later with Reed making a touch pass off a steal to Calvin for a layup.

The Pirates made one last charge with Gilbert converting a Lincoln turnover into points on a drive that cut Lincoln's lead to 52-49 at the 1:44 mark. Thirty seconds later Calvin raised a three and when Greenland committed an unforced turnover the Wolves made them pay. Moore sank both ends of a 1-and-1 as did Calvin to account for a 10-point road win.