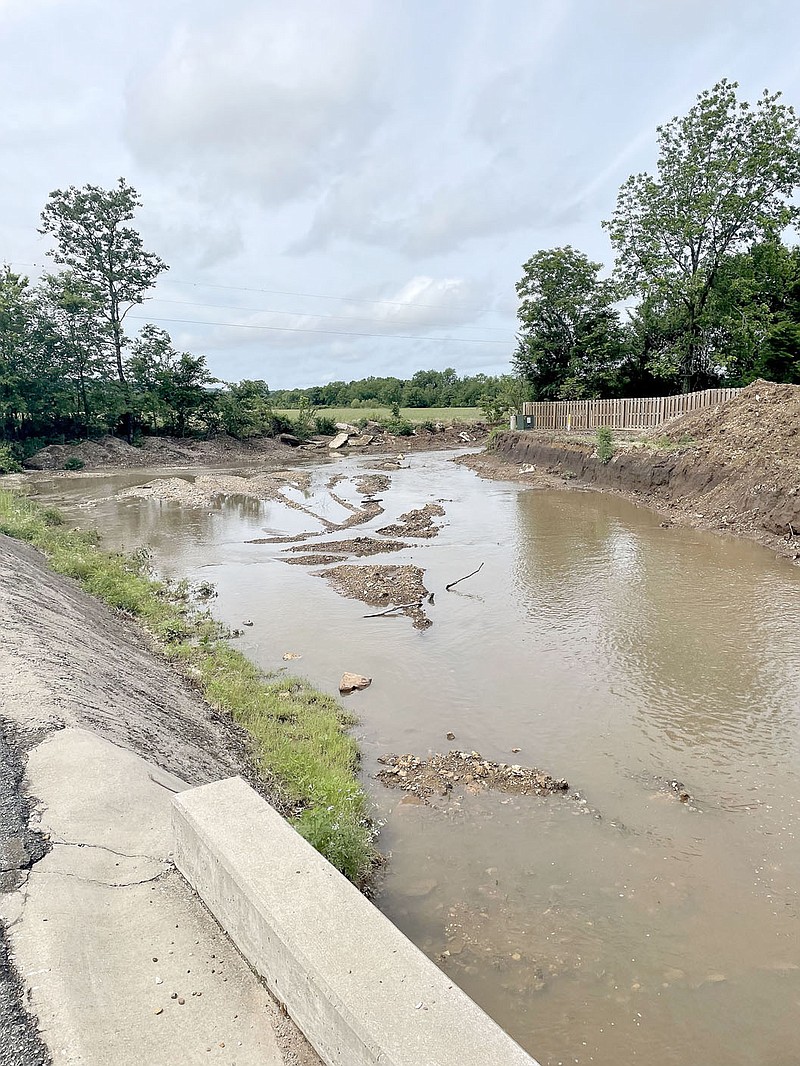 PHOTO COURTESY CITY OF FARMNGTON Farmington City Council approved an ordinance last week to install a retaining wall to improve storm drainage for Rosebay Lane in Meadowsweet subdivision. The wall will go along the bank of this area that flows into a creek behind the houses on Rosebay Lane.

"This is the final piece of the puzzle," Mayor Ernie Penn told council members in explaining the project. "We need to protect the dirt and the bank so it doesn't wash out our utilities."

The council approved a contract with Second Nature Landscaping for $84,009 for a 1,230-feet retaining wall, called a Redi-Rock System.

According to the ordinance, Second Nature Landscaping of Fayetteville has 22 years of experience and is one of the few companies in Arkansas that installs these type retaining walls made of precast concrete modular blocks.

The company has installed the Redi-Rock System in multiple places in Northwest Arkansas, including Cave Springs, Rogers, Fayetteville and Springdale.

The council passed the ordinance with an emergency clause.

Penn said the retaining wall will give the area a "more professional look." The wall will be installed around the perimeter to protect utilities and stop erosion of the dirt bank.

Residents who have been flooded on Rosebay Lane in Meadowsweet subdivision have asked for help from the city for more than 10 years and the city has completed some drainage improvement projects over the years to help with the flooding.

In 2020, the city purchased the house at the corner of Garland McKee and Rosebay Lane for $275,000 and then demolished the house so water could be routed across the empty lot into a creek that flows behind the houses. Work to alleviate flooding has included condemnations and opening up the drainage area.

In addition to the retaining wall, Penn said the city also will do some work on the east side of Garland McKee Road to prevent rain from flowing over the road during excessive storm events.

During the latest storm in May, Penn said no one living on Rosebay Lane had any water come up into their house.

The council also approved an ordinance to waive the requirements of competitive bidding for emergency street repairs on Rheas Mill Road.

The council approved a contract with N.E.C., Inc., for $49,753 to repair Rheas Mill Road where the shoulder was washed out from storm water in May. The city has used N.E.C. for other projects, including the bridge on Hunter Street and drainage improvements on Rainsong.

In other action, the council tabled an ordinance to vacate the unused right of way located at the corner of Hill Street and West Vine Street.

Thompson said his plan is to use the land on West Vine for a paved parking lot for his business, Pedal Pops on Main Street. He said he would be able to build a bigger parking lot with the vacated easement and the lot would also be available to help other businesses along Main Street and to help alleviate any impact in the neighborhood from people parking along the street.

The council tabled the request after realtor Drake Taylor with Griffen Company Realtors, representing adjacent landowner Debbie Dorman, pointed out how these type situations are handled in other cities.

In other cities, a vacated easement is split 50-50 between both adjacent landowners, Taylor said. If the city is going to vacate the property, Taylor said Dorman would like to get her half of the 30-foot easement.

City attorney Steven Tennant recommended tabling the ordinance to give him time to meet with both property owners and come up with a resolution. Tennant said he wanted to avoid any possible legal problems or lawsuits filed against the city from the action.

"I think we need to figure this out," Tennant said. "I need to research this."

During the public comment period at the beginning of the meeting, property owners in Valley View subdivision asked for updates on flooding issues on their streets. The same property owners addressed the council in May with their concerns.

Penn said he would send out emails to everyone to let them know what the city plans to do. For now, Penn said the city is waiting for the area to dry out for further evaluations.

Penn encouraged the property owners to email him with questions and not wait until monthly meetings to come before the council.

One of the property owners, Tina Purser, told him the women were representing many people with concerns in the subdivision. Purser also noted the maintenance of the former golf course is getting worse and she thinks that is adding to the problems with drainage.

In other business, the council:

• Authorized the transfer of title to a 1995 Freightliner fire truck from the city of Farmington to Prairie Grove Farmington Rural Fire Association and removed it from city inventory. The city now has a 2017 Freightliner.

• Approved a request from police Chief Brian Hubbard to transfer a radar unit to Alpena Police Department. Farmington no longer uses the unit.

• Approved a request from Hubbard to remove and destroy five moving radars from inventory. The radars do not work and are expensive to repair. The department is currently buying new moving radars.