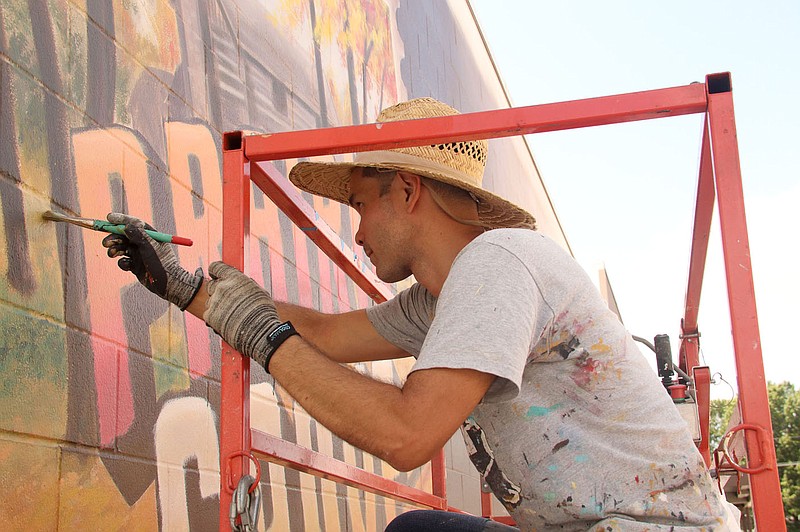 LYNN KUTTER ENTERPRISE-LEADER Lucas Aoki, a native of Argentina, paints a mural at Prairie Grove Public Library last week. He has lived in the Austin, Texas, area since 2007.

PRAIRIE GROVE -- A plain, blank outside wall at Prairie Grove Public Library is now a whimsical piece of artwork created by a talented Austin, Texas, artist.

Lucas Aoki, a native of Argentina, began the mural on the wall earlier this month and the mural fulfills one of the goals that librarians have had for the blank slate.

"Since we moved in here, we've wanted to put up a mural on that wall," said library director Megan Wood.

The wall faces the playground and Wood envisions families enjoying the view as they play outside. She believes many others will use the painting as a backdrop for photos.

Wood said she tried to find someone from Northwest Arkansas to paint the mural without any luck. Finally, a Fayetteville artist who was too busy to do it recommended Aoki.

"We looked at his art and knew it was exactly what we wanted," Wood said.

Aoki describes his style as whimsical and playful and that's what Wood and her staff wanted, a whimiscal, fairytale feeling.

After doing some research on the community of Prairie Grove, Aoki also added a vintage look to his mural to capture the history of Prairie Grove Battlefield State Park and the antique and vintage stores in the downtown area.

Wood and Aoki had lots of conversations back and forth about the project but Wood said the finished mural will be so much more than she expected.

"It was definitely a colloborative effort but the design is totally his," Wood said.

Aoki said he designed the mural with kids as the main audience. He's already seen lots of children playing on the library's playground and seen families going into the library.

"We want to create this idea that books bring a personal journey," Aoki said. "It's the idea of being transported with books and the magic of what a book can bring you."

He selected vintage colors that have a look that's a little older but also timeless and edgy with a modern twist, he said, adding he believes the library mural will be fun and will spark curiousity.

He notes that "nothing on this mural is real. It's a representation of our dreams."

Aoki moved to the United States in 2005 and has lived in Texas since 2007. He's painted other murals in Northwest Arkansas and likes to come to the region for rock climbing and the art culture.

He went to school in Argentina for web design and at some point became curious about painting in general. He said his interest paralleled with the street art movement and. as he met artists, he painted with them, learned a lot and "kinda made my own way."

Aoki has an art studio in Austin and does commissioned work as well as his own work. He started painting murals about 10 years ago in Austin.

The mural was made possible by a private donation made to the library from the Gene and Emogene McKee Trust Fund. This donation also helped to pay for the playground. 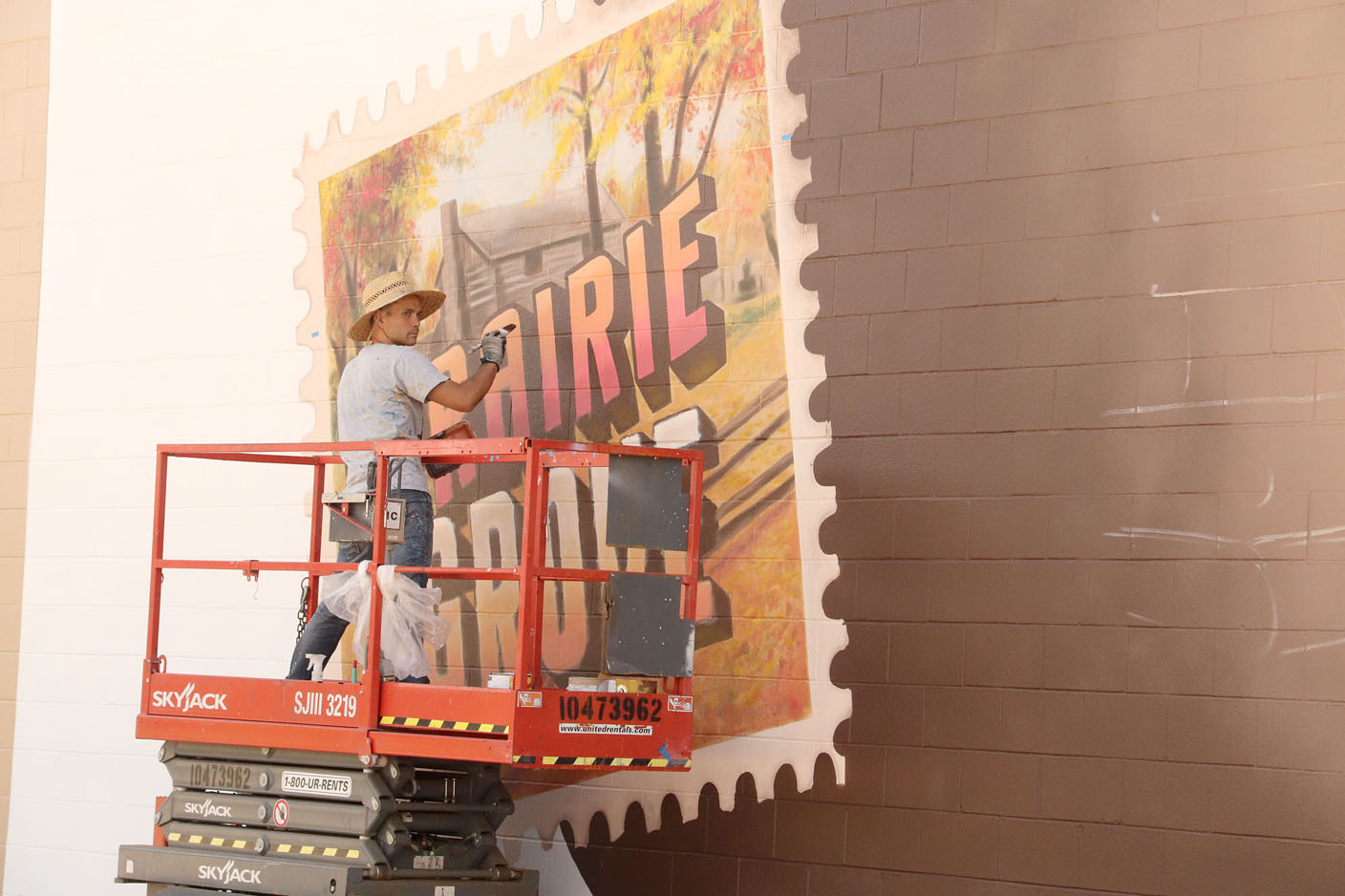 Lucas Aoki of Austin, Texas, works on one of the main sections of a new mural for Prairie Grove Public Library. The stamp has Prairie Grove in the foreground with the battlefield state park in the background. 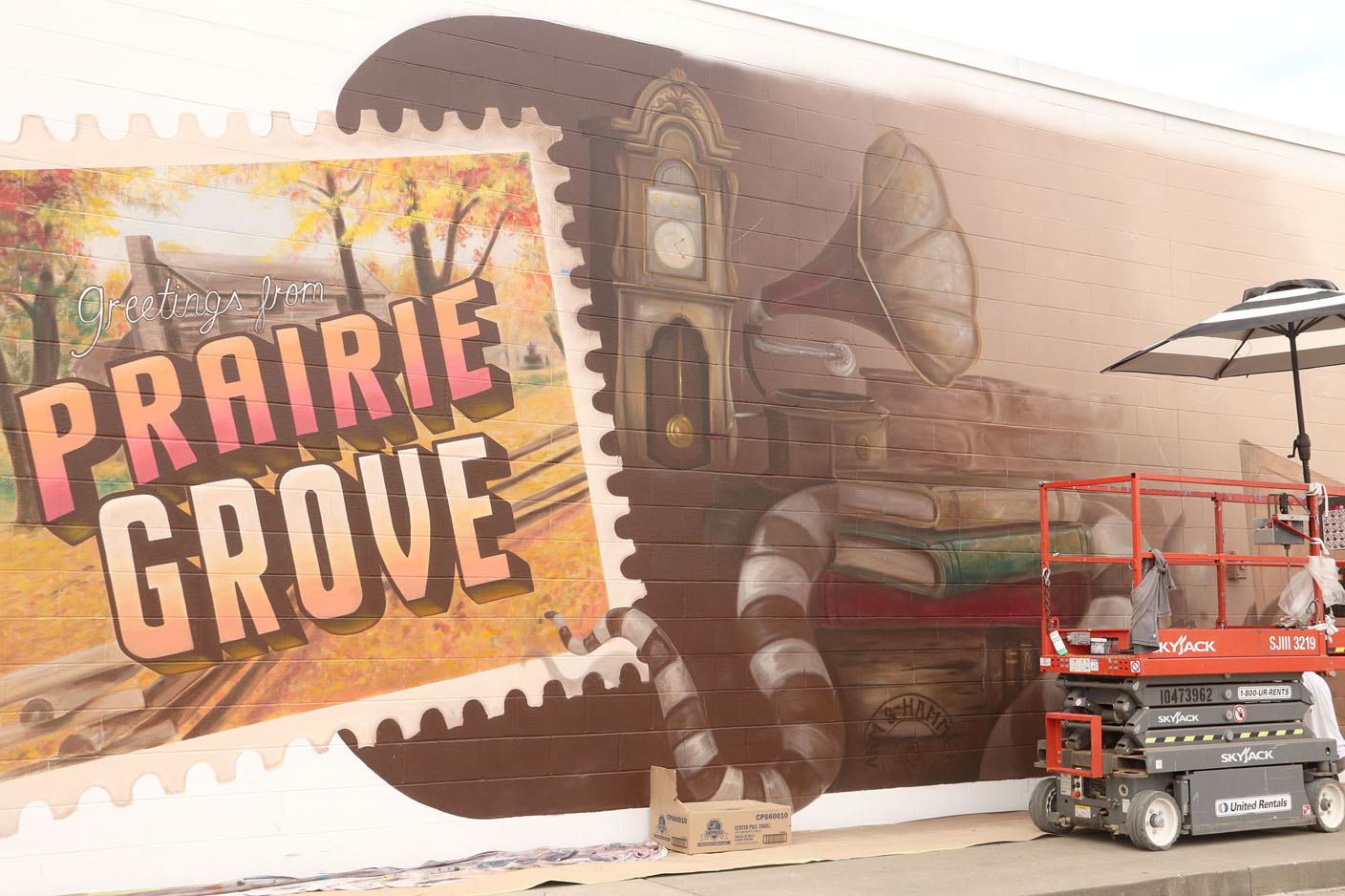 LYNN KUTTER ENTERPRISE-LEADER Lucas Aoki of Austin, Texas, is painting this mural on an outside wall at Prairie Grove Public Library. He describes his style as whimsical and playful and says the Prairie Grove mural is targeted to children, with elements of the historical nature of the community. 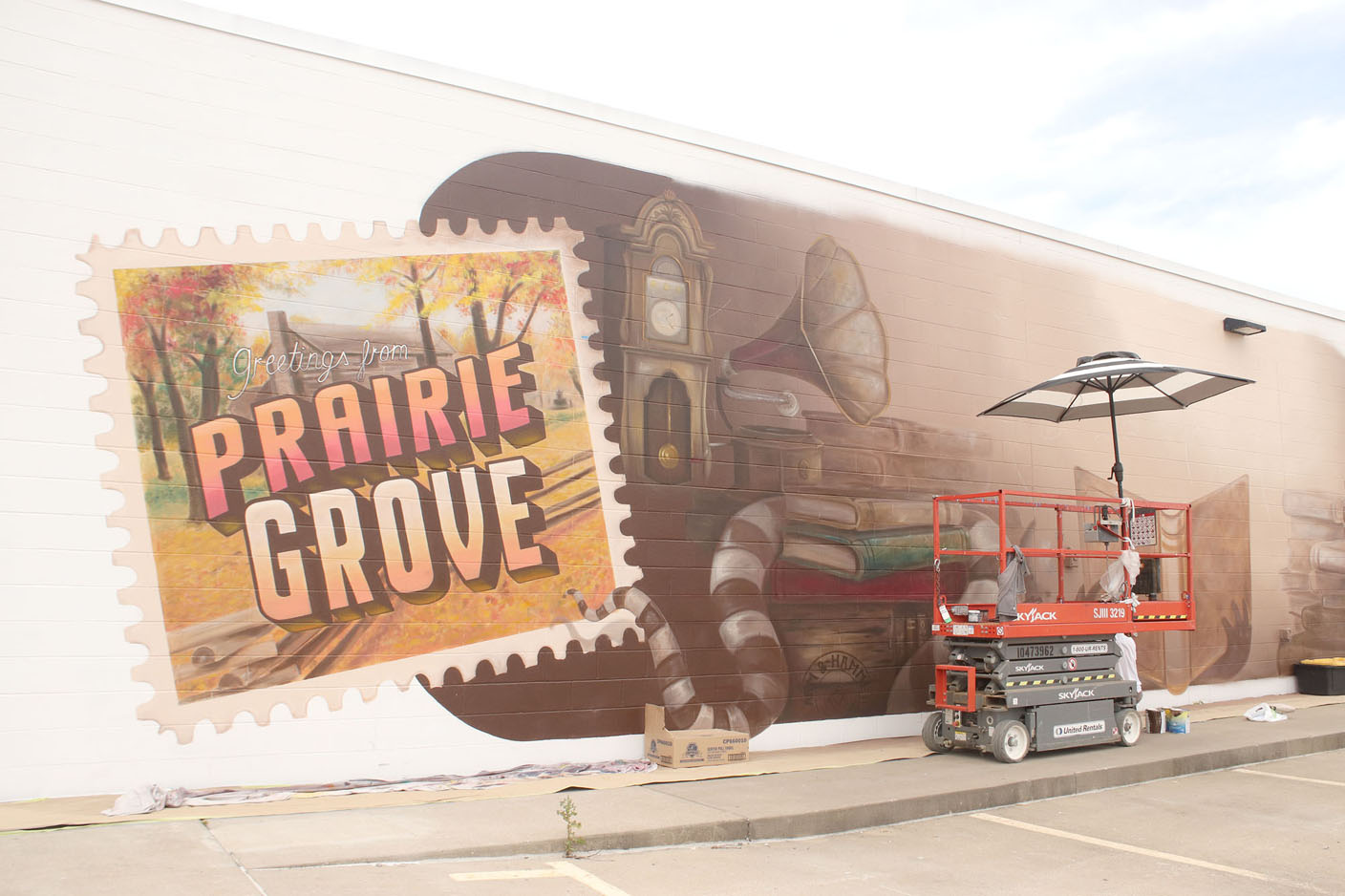 LYNN KUTTER ENTERPRISE-LEADER Artist Lucas Aoki of Austin, Texas, has been working on a mural for Prairie Grove Public Library for about two weeks. He said mural has a vintage look with a whimsical theme to show that books bring a magical, personal journey. 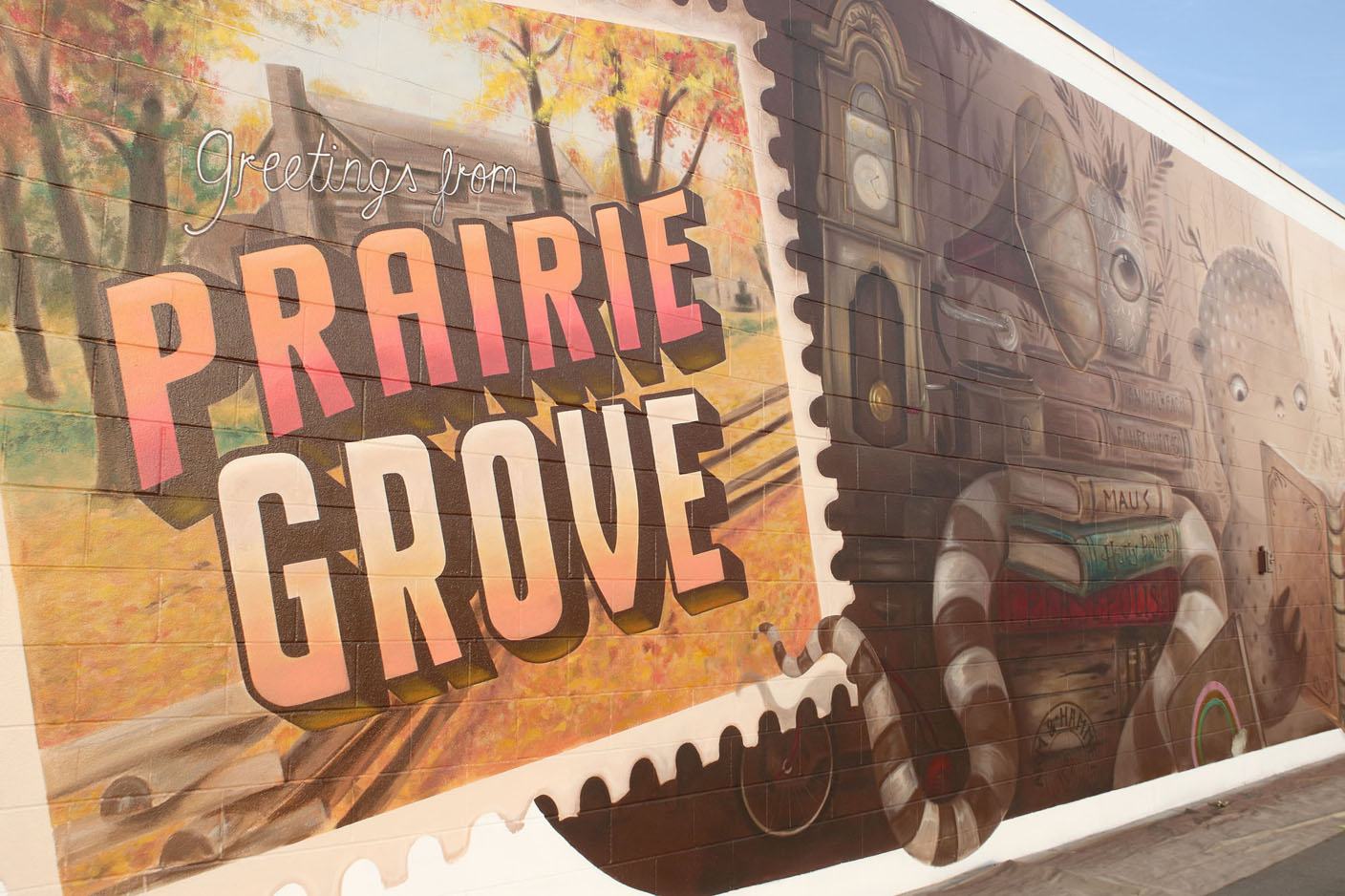 LYNN KUTTER ENTERPRISE-LEADER This new mural on an outside wall at Prairie Grove Public Library is the result of a collaboration between library staff and artist Lucas Aoki of Austin, Texas. Library director Megan Wood says, however, that the mural is all Aoki's design and is much more than she envisioned. 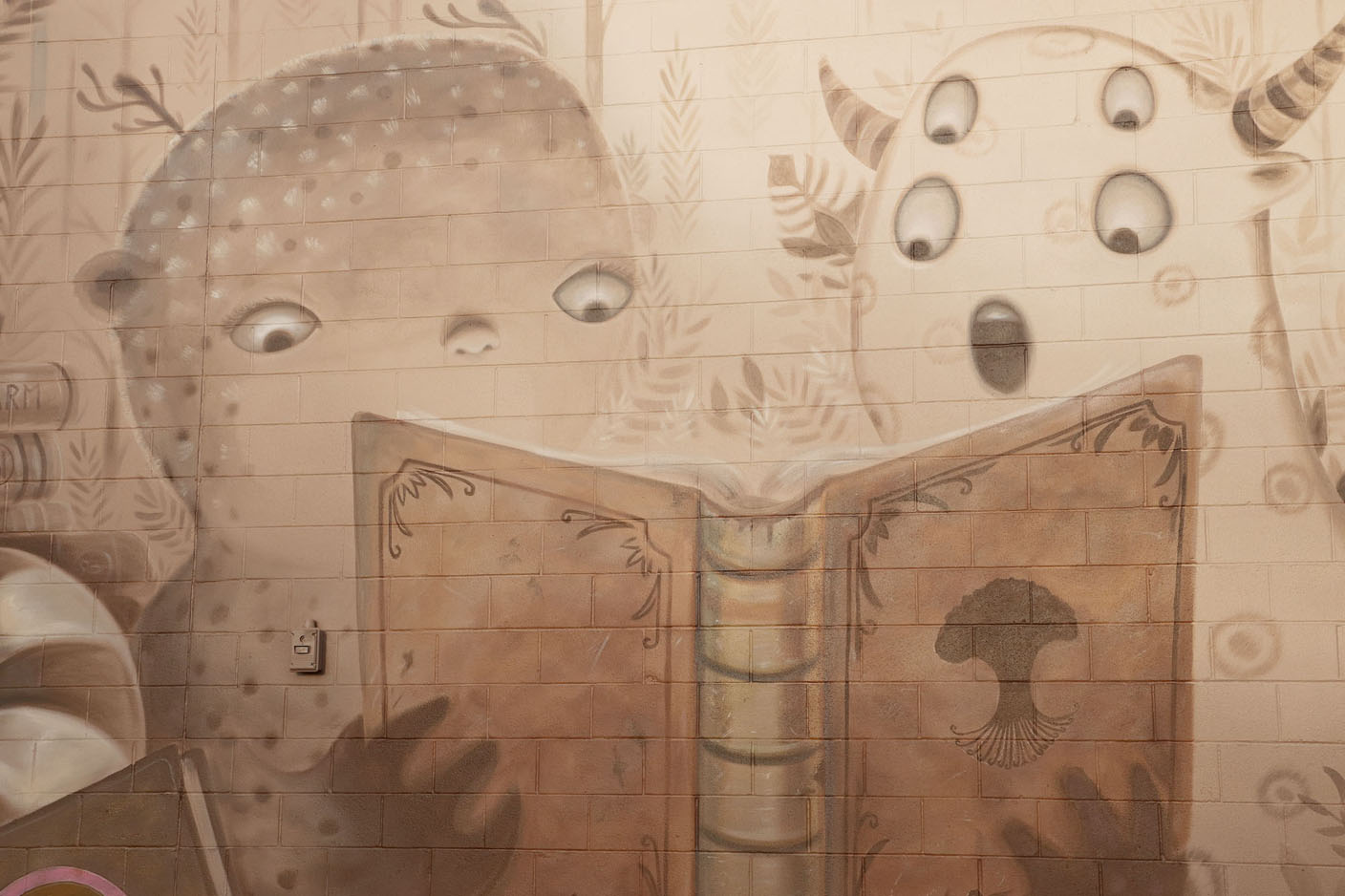 LYNN KUTTER ENTERPRISE-LEADER This finished mural can be seen on an outside wall at Prairie Grove Public Library. It captures the fairy tale journey of reading books with an added vintage element that captures the history of the community.