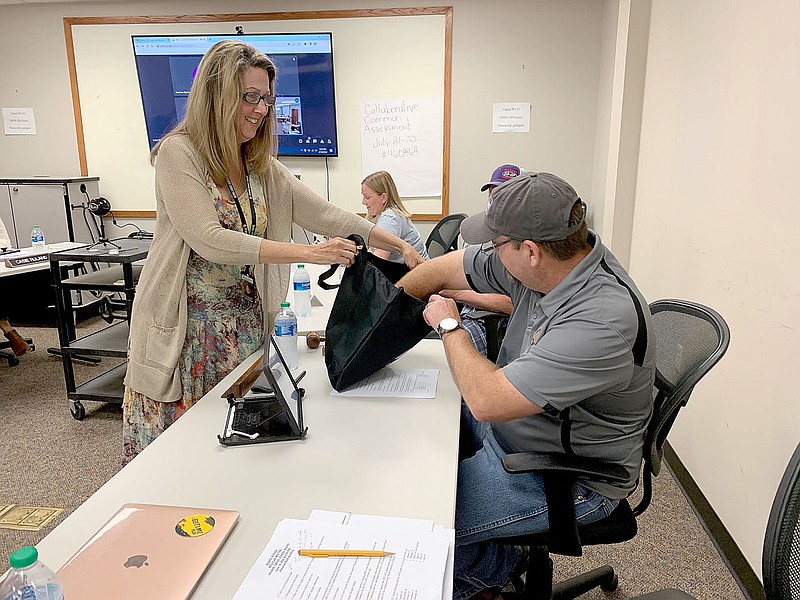 LYNN KUTTER ENTERPRISE-LEADER Reba Holmes, superintendent of Prairie Grove Schools, holds the bag for school board president William Dick to draw a number for the length of his current term on the board. Dick's term will be four years. He was elected board president at the June 14 meeting, replacing Casie Ruland, who has served as president the past year.

PRAIRIE GROVE -- With two new members sitting at the table, Prairie Grove School Board reorganized and elected officers last week and then drew lots to determine term lengths for all seven board members.

The board on June 14 elected William Dick as president. The board voted to keep the other officers in place. Whitney Bryant will continue as vice president and Bart Orr as secretary.

The board now moves forward from an all at-large board to one with five members elected by zone and two members elected at large. Lots for term lengths were drawn so that no more than two board positions are up for election each year. In subsequent elections, candidates will run for five-year terms.

The two newest members to the board are Davis, who was elected in the May 24 school election, and Mahaffey, who was appointed to fill the position vacated by Matt Hargis last month.

With administrative duties out of the way, the board voted to approve new playground equipment and the installation of the equipment from PlayWell for a total cost of $45,35.65, for the new middle school building.

In all, the playground area is costing about $125,000, said Superintendent Reba Holmes. Other costs are fencing, sod, sprinklers and miscellenous items.

Middle school Principal Shayne Taylor said the school will salvage as much old playground equipment as it can. What's moved over to the middle school building will be painted so it will look nice, Taylor said.

In giving his curriculum report, Assistant Superintendent Pete Joenks said more than 50 students are at the high school taking classes to recover credit. Of those, 22 are 11th graders, he said.

Beginning with the 2022-23 school year, the ninth grade class and all subsequent classes will be required to take a computer science class to graduate, Joenks said.

The state also is requiring high schools to hire a licensed computer science teacher before the 2023-24 school year. Joenks said Prairie Grove is trying to find someone in-house who would be willing to get certified for this.

Schools are required to submit an annual report on dyslexia services. Prairie Grove identified 77 students exhibiting the characteristics of dyslexia this year, up from 60 for the 2022-21 school year.

The school also is required to report on any bullying complaints for the year. The middle school had two reports and these were dealt with through in-school suspension, according to Joenks.

Shawn Witt, in giving the technology report, said the district is still waiting to receive wireless access points for the new school. The delay is due to the supply chain, said Witt, who heads up information and security. If the access points are not in before a certain date, he said his department will start "scouring" for all the old ones they can find.

Another change is that Shelley Dougan will move from middle school EAST teacher to elementary PE teacher.