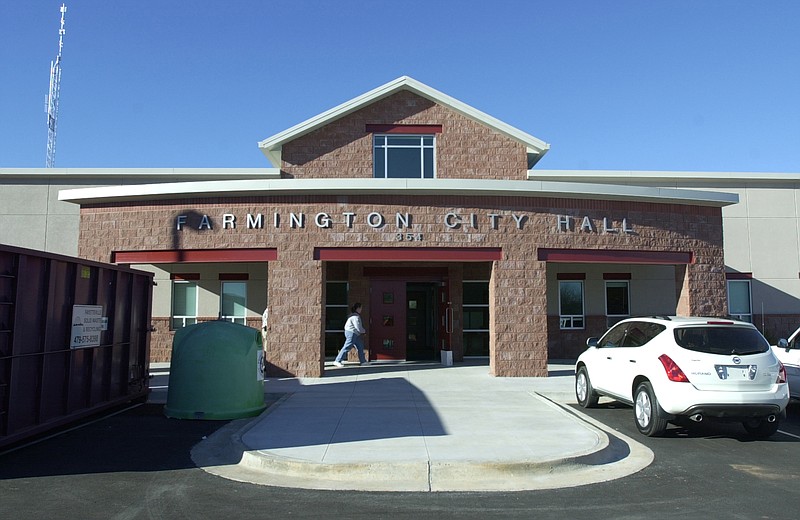 Workers of Farmigton City Hall help move in to the new building off Highway 62 Friday next to the Senior Center and Fire Station. (NWA Democrat-Gazette/FILE PHOTO)

FARMINGTON -- With no discussion or questions from council members or the public, Farmington City Council last week approved a 2023 city budget that includes a 6% cost-of-living raise for employees, three new firefighters and one new police officer.

The total vote did not include council member Keith Lipford, who was absent, and Linda Bell, who has vacated her Ward 2 seat because she has moved out of the ward.

Bell now lives in Ward 3 and was elected to Ward 3, Position 2 in the Nov. 8 General Election. She will begin serving as a council member again in January.

In a memo to council members, Mayor Ernie Penn repeated what he's said every year during budget time, that his philosophy is to "budget conservatively for income and control operating expenses."

In all, for the general fund, the 2023 budget will be about 22% greater than the 2022 budget, according to Melissa McCarville, city business manager.

And even then, Penn said, the figure is a "conservative estimate."

The budget also shows that income from the state sales tax is increased in 2023 from $1.4 million to $1.8 million.

For expenses, McCarville said the 6% raise will cost about $163,000 for all employees, including the street department, library, city hall, public works, fire and police departments.

In a note, Chief Brian Hubbard explains that his budget increases include a new police officer, the cost-of-living raise plus a possible mid-year raise and three new police vehicles.

Hubbard said he also increased his budget for gasoline and repair and maintenance of vehicles because prices have gone up. He requested additional money to replace parts of the officers' uniforms.

Hellard said three more firefighters will allow him to have four per shift and this will help with overtime costs and will help when firefighters are gone for various reasons.

The general fund budget for administration increases from about $1 million in 2022 to $1.2 million in 2023. Line items with increases include payroll, utilities, building maintenance and technical support.

The budget for the parks department will increase from $472,000 in 2022 to $988,000, primarily because of an increase in the line item for capital improvements from $125,000 to $625,000. This money will be used for the new Creekside Trail and other projects identified during the year.