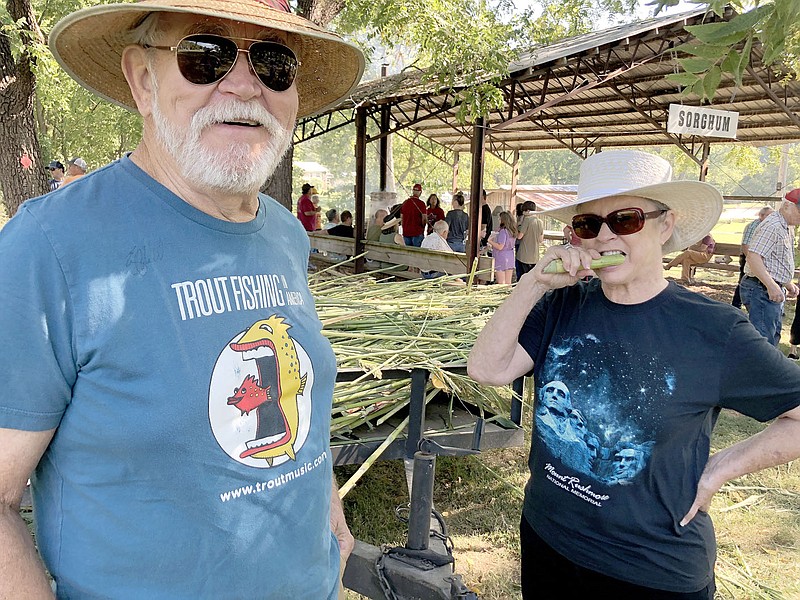 Robert and Barbara Reynolds, from Springdale (via Batesville), take in sorghum processing and sample a piece of cane at the Cane Hill Harvest Festival on Saturday.

CANE HILL -- Historic Cane Hill's 36th Harvest Festival roared back this past Saturday after a two-year hiatus due to the coronavirus pandemic with record attendance at its Country Breakfast and other scheduled events. Many people of all ages strolled the expansive grounds, listened to music, watched artists at work, participated in Historic Walking Tours and explored the Cane Hill College building and other historic structures.

Crowds were heaviest from mid-morning to around 2 p.m. when the heat began to take a toll. Soon though, shade reached the seating area in front of the music stage, and people shifted their chairs and hay bales to match.

Vanessa McKuin, Historic Cane Hill executive director since June 2020, appeared beyond happy at the turnout, her first Harvest Fest as director. She and her mom sat at the information table along with volunteers selling sorghum molasses and festival t-shirts.

The day-long event focused on crafts and artisan skills this year, some of which provided demonstrations and allowed participation. Artists included musicians in six bands, a blacksmith, sugarcane pressers and cookers, wool spinners, lace makers, quilters, and basket makers. A honey bee keeper was also on hand.

The first event of the day was the Country Breakfast from 7 to 10 a.m. Before 9 a.m., the providers had already made one trip to the store for more ingredients, then they dropped the price from $8 to $5 because they ran out of biscuits and gravy. They sold out by 9:45 that morning.

The first band of the day, led by Jacob Phaneuf, was the Raising Cane Hill Band. Phaneuf also directs the Cane Hillbillies, who played fifth in the line-up. Members of the first band were almost all 11 years old, and those in the second band about three years older.

Phaneuf and his wife Sarah own Inside Out Studios in Farmington, and Phaneuf directs and teaches music for the Historic Cane Hill Roots Music Program. Phaneuf said, "It's cool keeping folk music alive, the skills alive, and [giving the kids a sense of] community involvement."

Bobbye Orona pointed out her son Gunnar in Raising Cane and said her son Peyton Orona would be playing in the afternoon with the Cane Hillbillies. The Orona brothers weren't the only sibling set in the two bands. Lennon Phaneuf played in the younger band and his brother Gibson in the older group, and same, respectively, with siblings Hattie and Edy Hall.

Other bands included East of Zion, Plaid Magpie, Statehouse Electric Band, and, the final band of the day at 5 p.m., Mountain Gypsy.

The music stage and seating area were more-or-less the central location in a large, gently sloping, well-mowed lawn immediately north of the 1886 Cane Hill College building. The College fronts onto white gravel College Avenue, which runs the length of the town one block west and parallel with Hwy. 45.

College Avenue formed the backbone of the event, including parking, and visitors could wander south along it a couple of blocks then turn east a block to get to Cane Hill Gallery and the Cane Hill Museum and Visitor's Center, both of which front the highway.

All events officially part of the festival were within five-minutes walking distance of each other, and restrooms were conveniently located both inside Cane Hill College and in an outdoor, stand-alone location.

A presentation at 4:30 p.m. about insects by J. Ray Fisher, PhD, was held upstairs in the Cane Hill College building, where he shared stories about how insects have changed the course of human history. David Collins, HCH program coordinator, introduced Fisher and explained the presentation at Harvest Fest was to pique people's interest in visiting the Smithsonian Institution's locally curated Habitat exhibit. Located mostly outdoors on the east side of Highway 45 across from the HCH Museum and Visitor Center, the exhibit opened in April and runs through the end of November.

Those who remained afterward listened to Mountain Gypsy, whose music was accompanied by grasshoppers' whirr across the grass and the first trills of birds' evening serenade, sounds that brought the festival to its close. 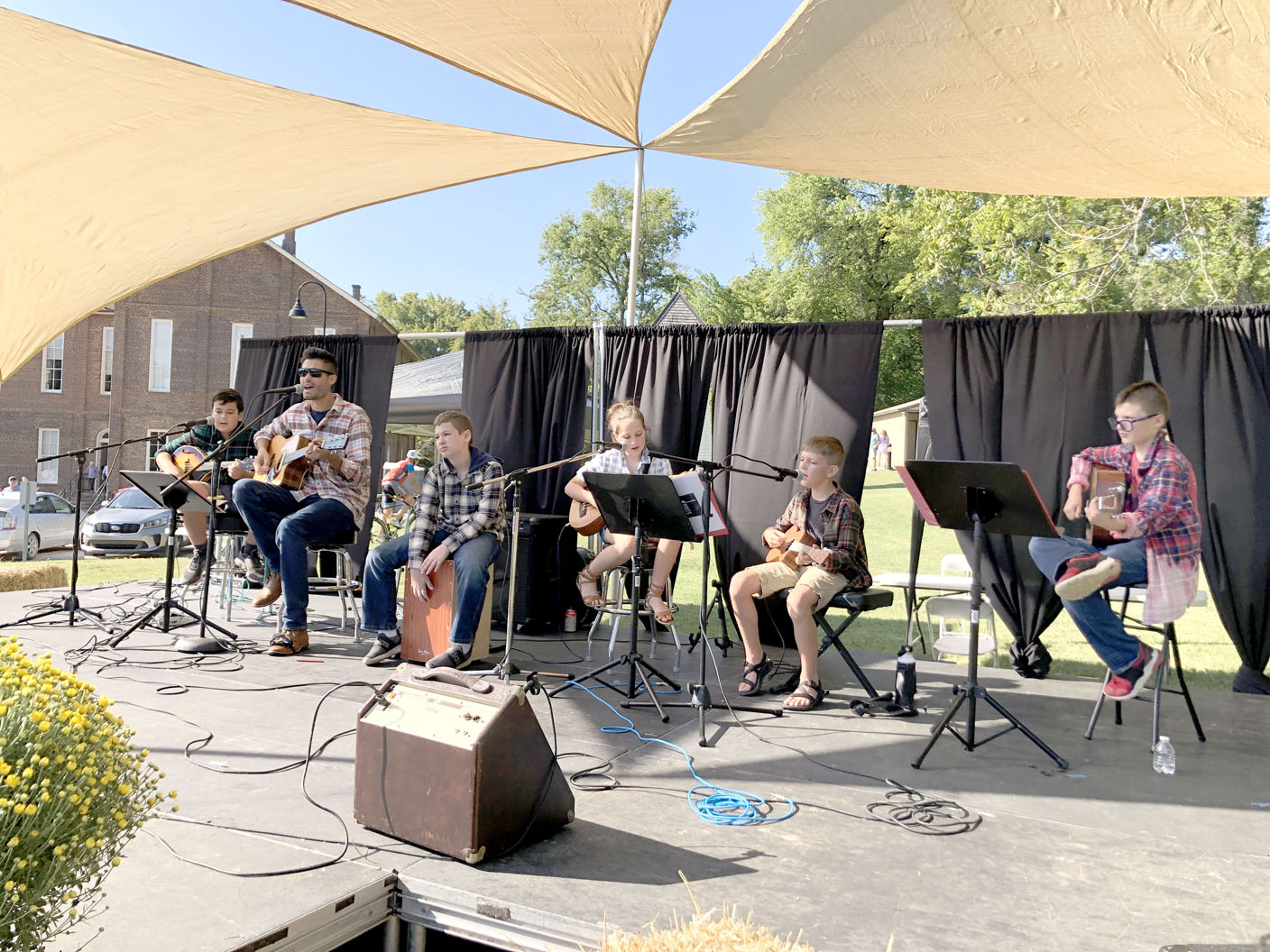 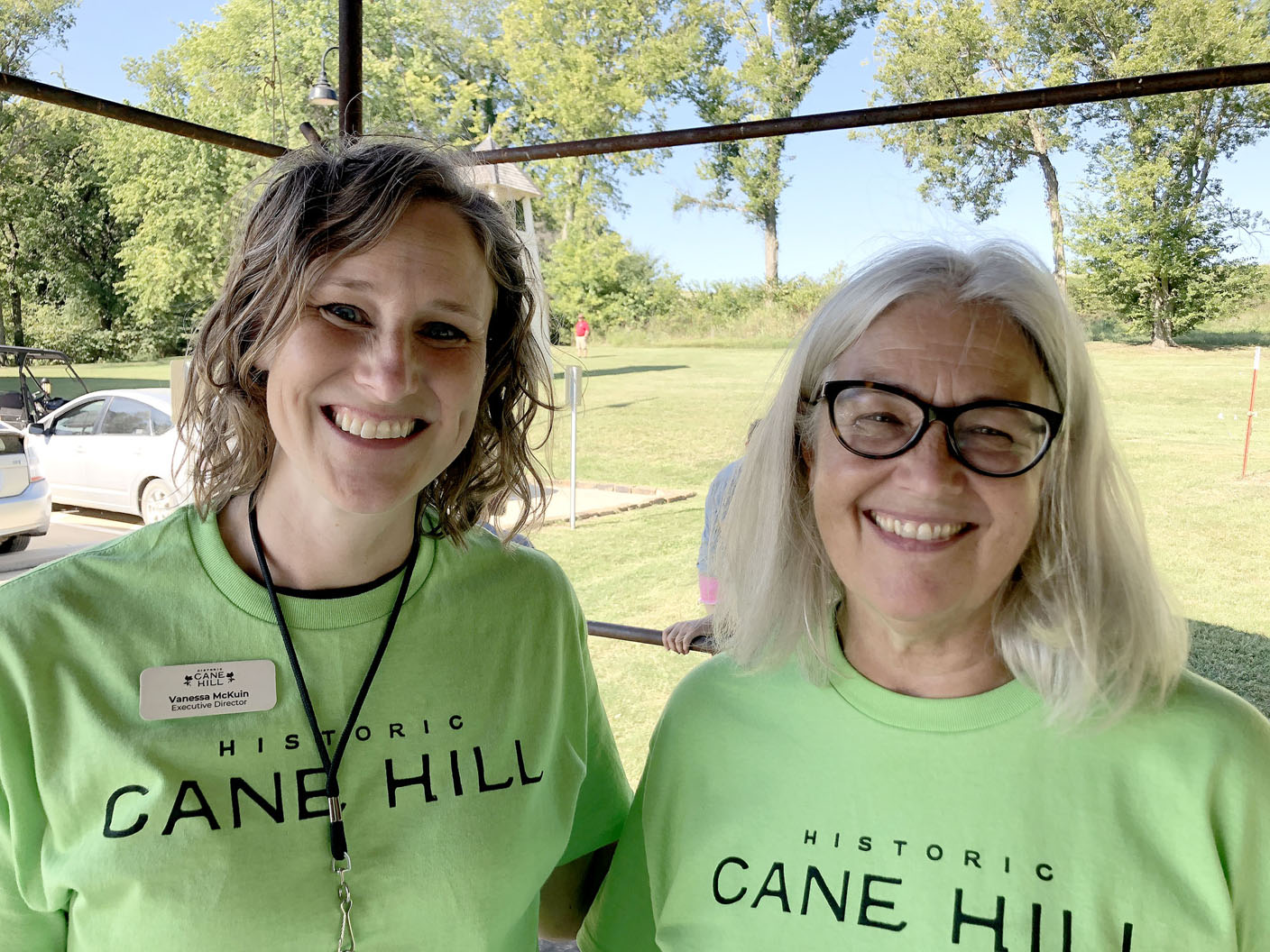 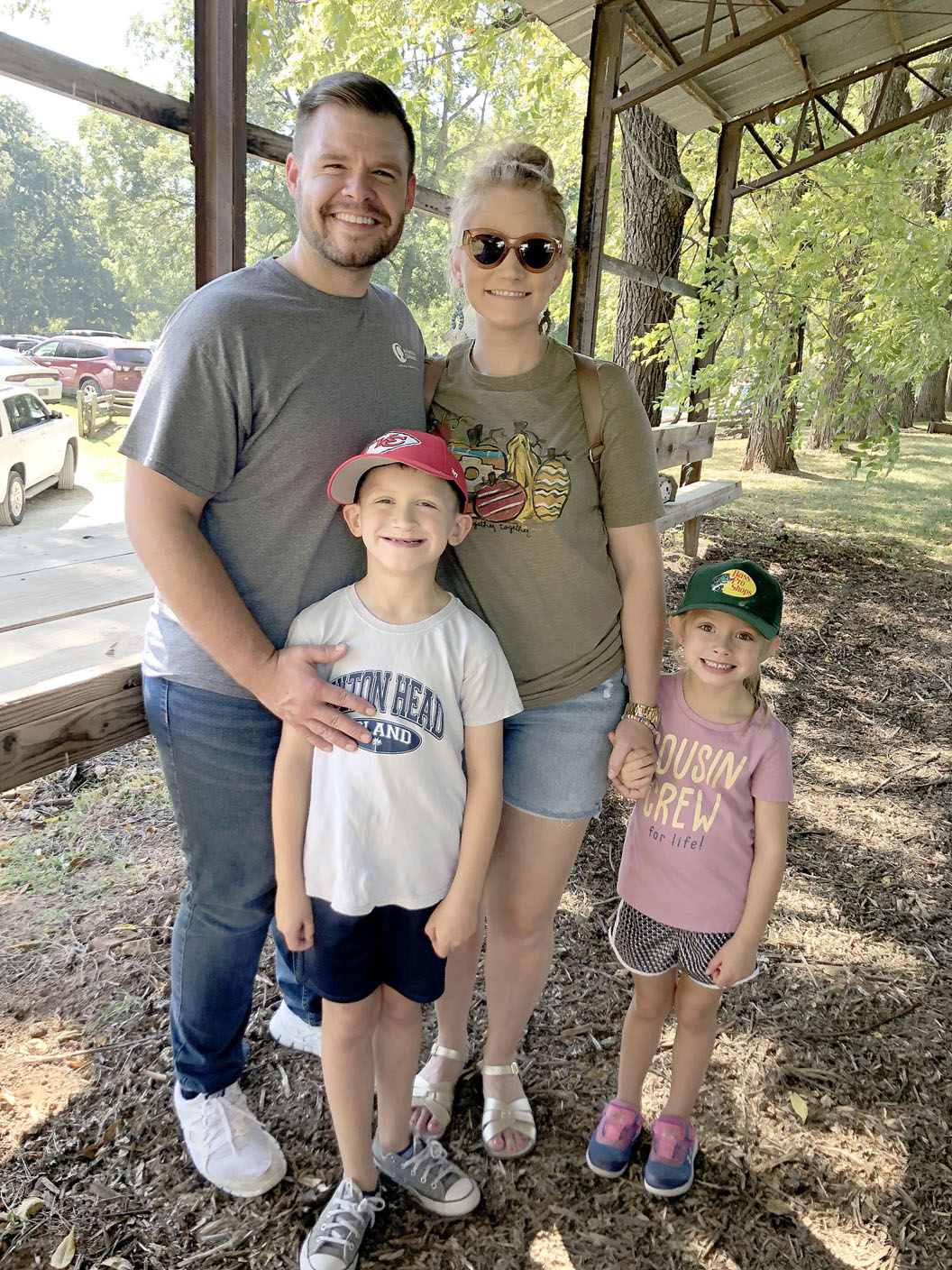 Justin and Lindsey White, of Farmington, learn about sorghum processing with their children, Collins, 8, and Halle Lynne, 4. 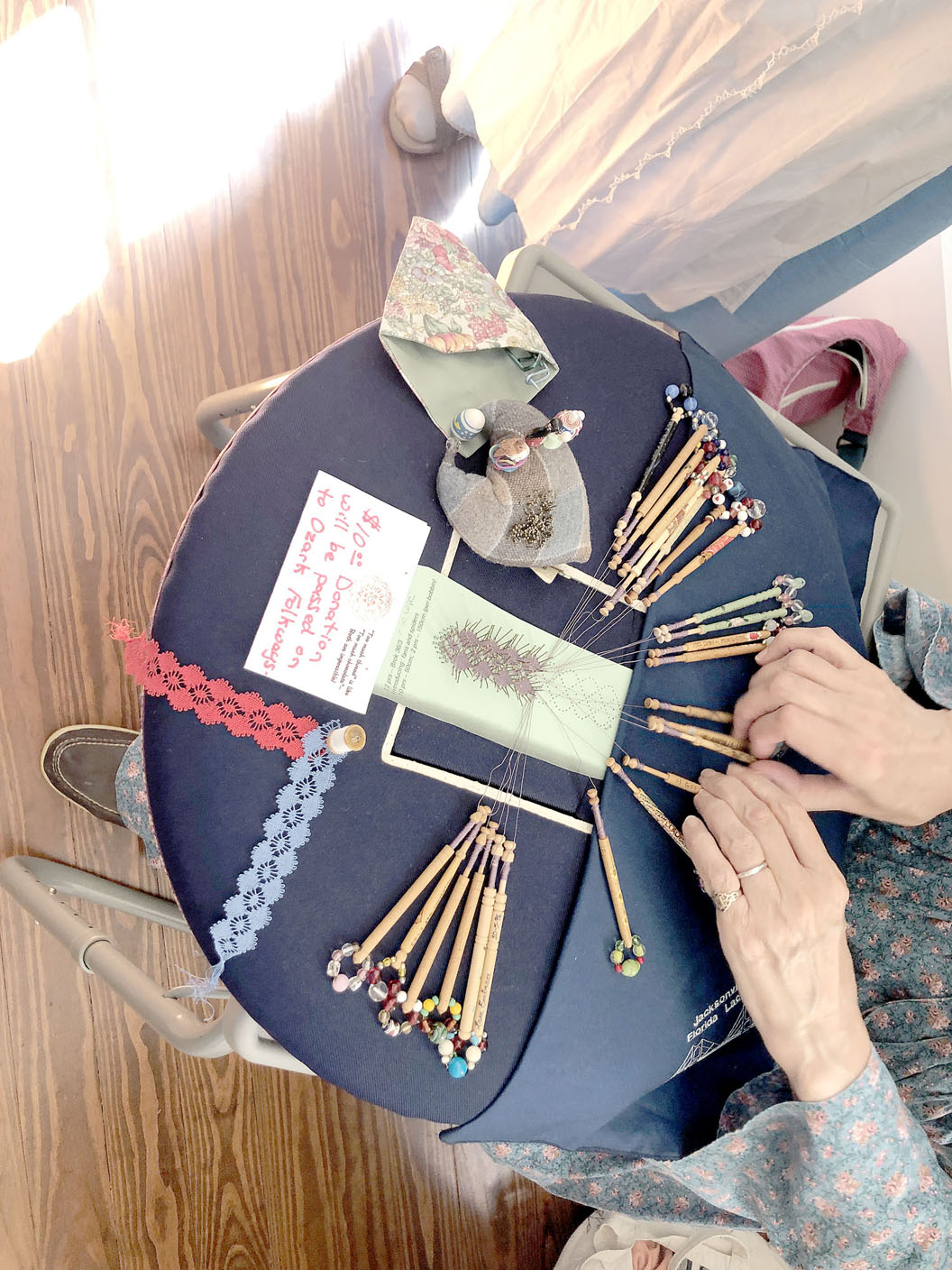 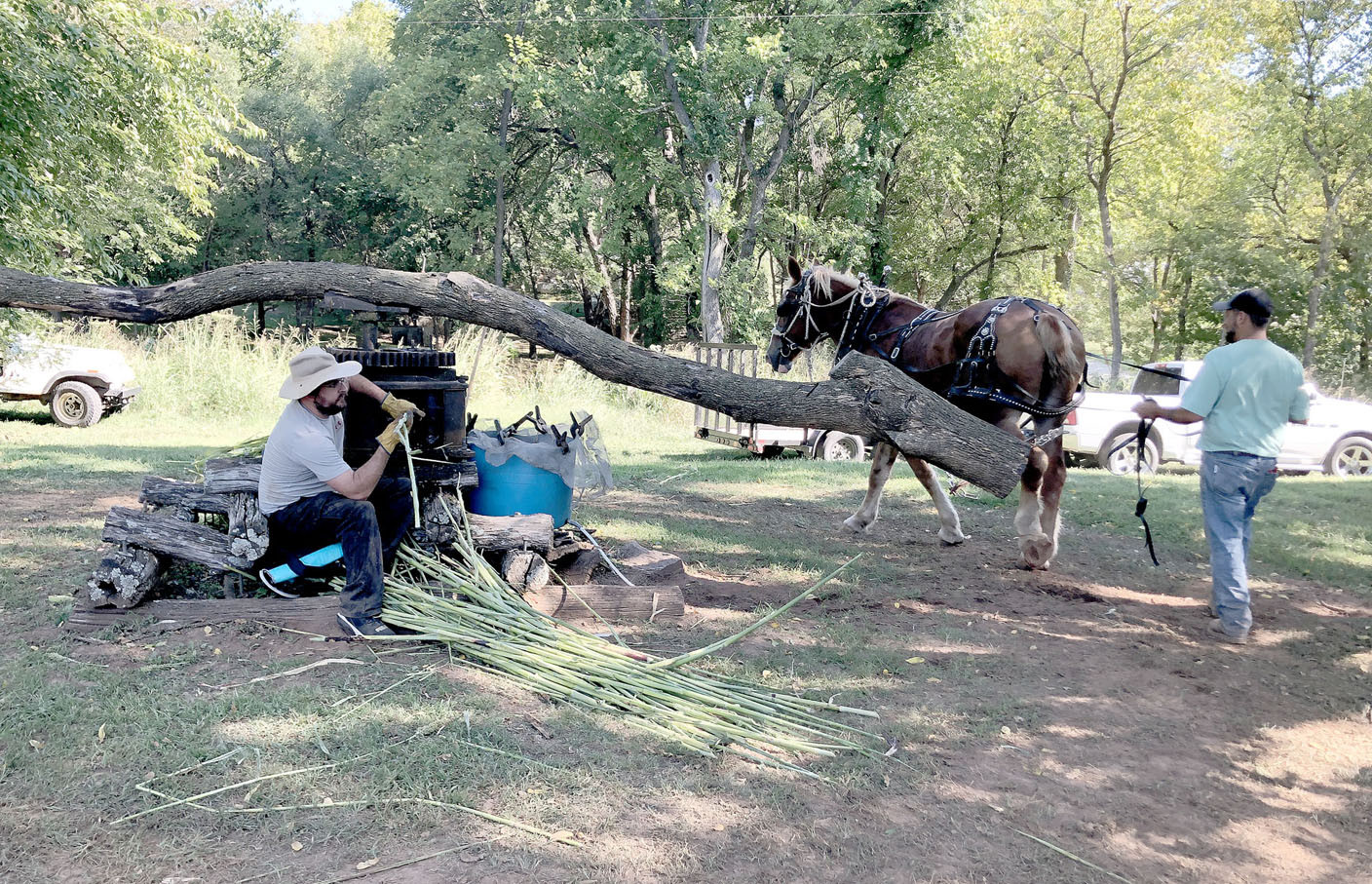 DENISE NEMEC SPECIAL TO ENTERPRISE-LEADER Clint Haegele feeds sorghum sugar cane into a press, while Jared Phillips walks with his Belgian draft horse Belle, whose circuit turns the mechanisms in the press that squeeze the surgary liquid out. 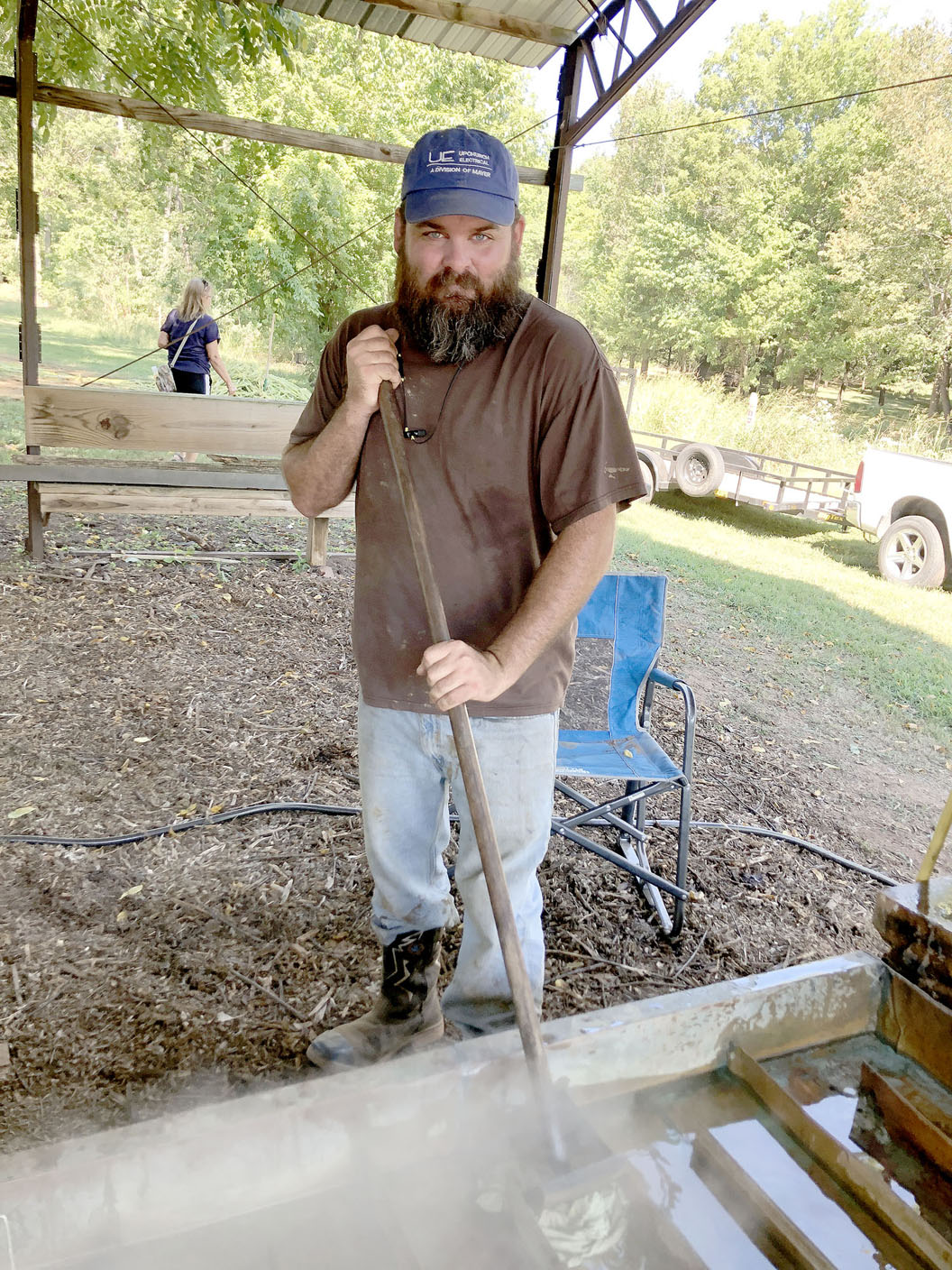 PHOTOS BY DENISE NEMEC SPECIAL TO ENTERPRISE-LEADER Luke Haegele of Greasy Valleyis the official sorghum juice cook at the Cane Hill Harvest Festival. He said he learned from his uncle Archie “Leonard” Reed, who served in that role for 27 years. Haegele said he’s cooked sorghum for three Harvest Festivals. 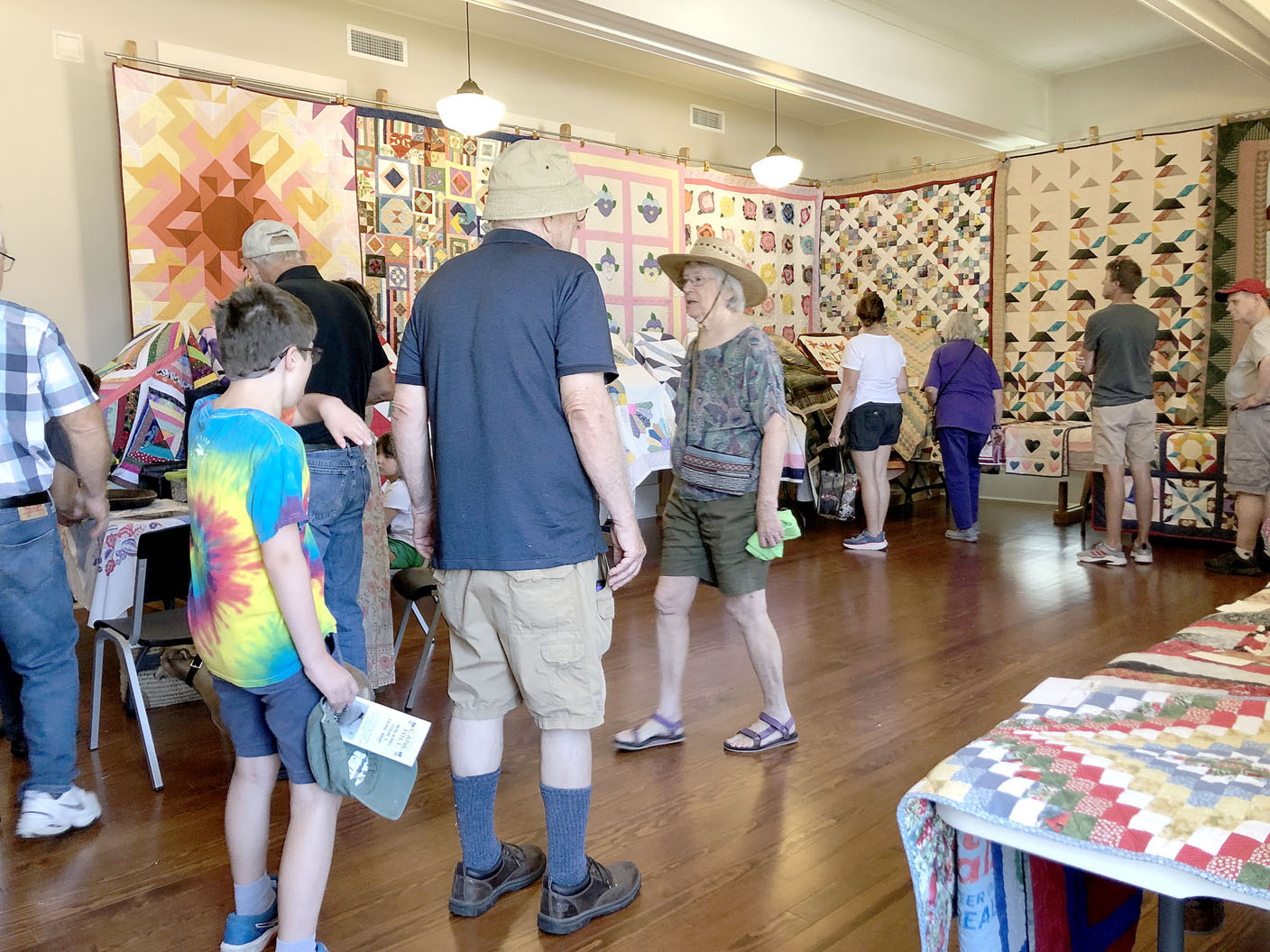 Visitors admire complicated and unusual quilts on display in a room in Cane Hill College building during the 2022 Harvest Festival. 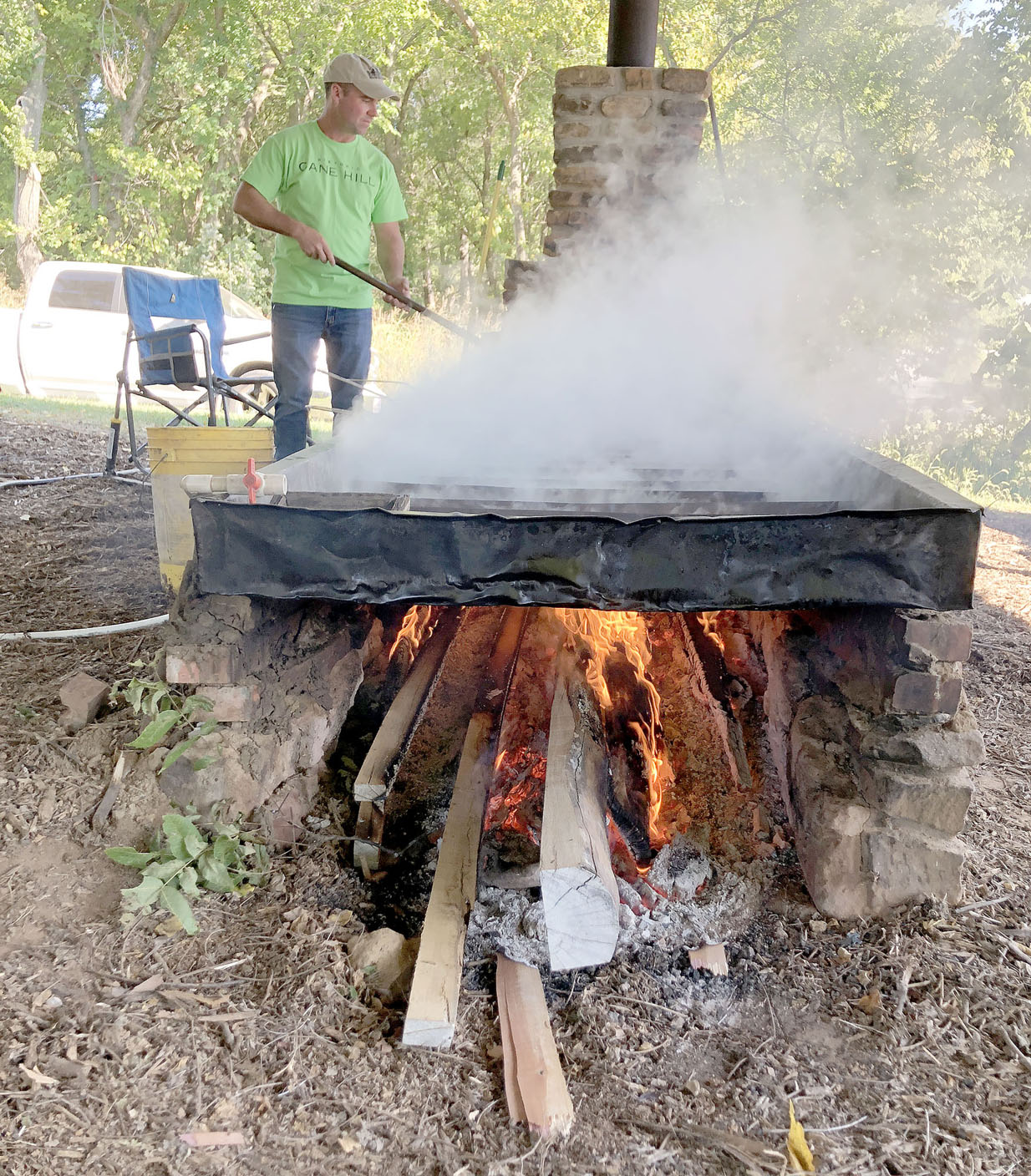 Jared Biggs, Historic Cane Hill sites manager, works the cooking sorghum above a blazing fire at the 2022 Cane Hill Harvest Festival on Saturday. The 36th festival was well-attended this year. 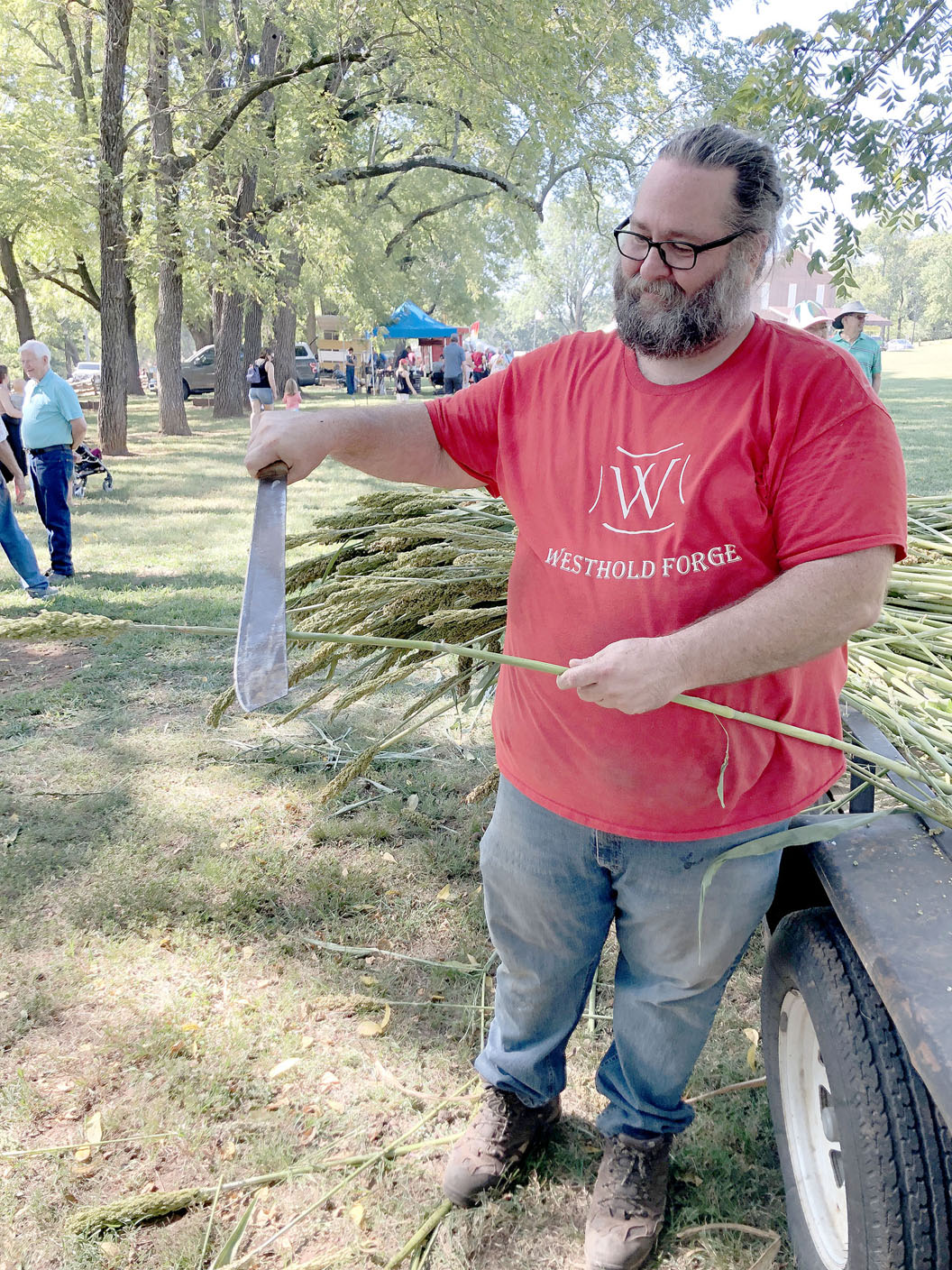 Jeremiah West, a Lincoln resident, shows one of the blades used to cut and trim cane stalks. The hard outer casings of cane have to be peeled away from the fibrous, juicy interior which can be chewed, but not swallowed, to extract a sweet liquid. Photo by Denise Nemec