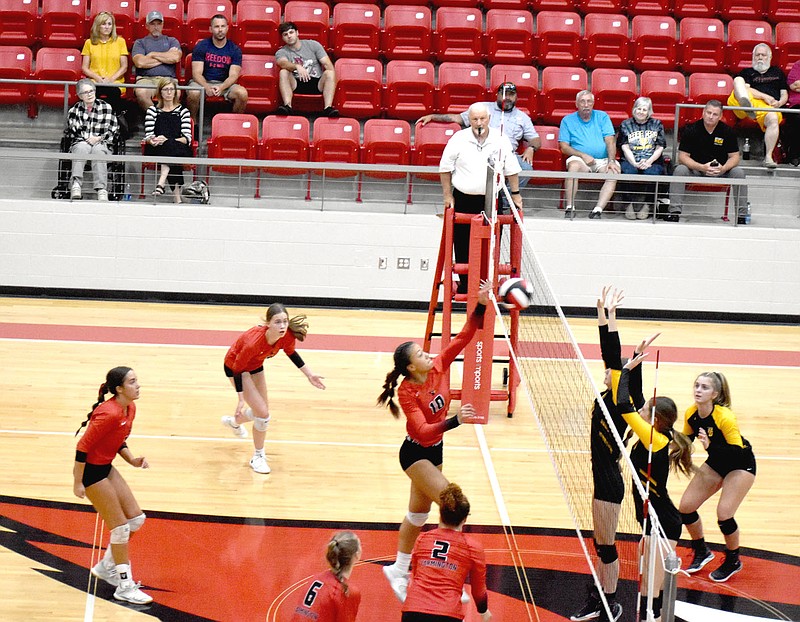 FARMINGTON -- Coming into the 2022 season Farmington volleyball coach Greg Pair knew he had to find a setter to fill the role vacated by the graduated Remington Adams.

Their offense jelled by the time the Lady Cardinals' first league match against No. 1 rival, Prairie Grove, rolled around Tuesday, Aug. 30 with Farmington taking a 25-19, 25-15, 26-24 sweep over the Lady Tigers.

Enter Naomi Polanski, who accounted for 13 assists, and Samantha Brye, a versatile player who can set or play hitter. Brye produced 5 kills and 13 assists. Pair acknowledged both performances as noteworthy in the overall team effort.

It helped that Farmington (4-2, 1-0 4A-1) was playing at home in Cardinal Arena. The Lady Cardinals served 10 aces and pounded 37 kills from 34 assists and 46 digs. Kaycee McCumber produced five kills.

"We had 37 kills to five errors. That's a pretty good ratio. It was spread out among five hitters," Pair said. "Zoe Nix had 12 kills; it was a huge night for her. Addie Kaiser, she struggled Monday (Aug. 29) against Springdale so it was good to see her get going. She had seven kills and only one error. Piper Robinson had five kills," Pair said.

Prairie Grove (2-1, 0-1 4A-1) worked its offense for 26 assists off 38 digs. Sophomore Emma Vertz accounted for 23 assists plus six kills for the Lady Tigers.

"Overall, we have a very young team, but I also think we have a very talented team," said Prairie Grove coach Lindsey Biocic. "Farmington doesn't make very many mistakes. They're very disciplined. They basically kept the ball alive and waited for us to make a mistake."

There were moments Prairie Grove asserted its offense and seized momentum only to short-circuit a run by a serving error or hitting miscue. Senior outside hitter Kenleigh Starr leads the offensive attack at 5-feet-10.

"She has really come along and worked to learn the speed of the offense we're trying to run. She has put in a lot of time," Biocic said.

Biocic also praised the opposite hitter, Ashtyn Burton, a 5-feet-9 sophomore, who also has done a lot of work to prepare for the season as the right side hitter.

Trailing 18-14 in the first set the Lady Tigers mounted a 3-0 mini run on back-to-back kills by Emma Vertz and Starr.

Robinson stopped the surge by pounding a kill for Farmington to begin a 7-2 run by the Lady Cardinals to close out the first set winning 25-19 when a Nix kill landed on the back row.

The rivals fought over each point early in the second set before Farmington pulled away from a 2-point, 11-9, advantage by scoring five unanswered points. Micah Foster (dig), Polanski (set) and Nix (kill) worked the offense to start the run, which had a Lady Tiger violation taking away a kill from the visitors. Brye a 6-feet sophomore ended game two with a kill putting the Lady Cardinals up 2-0 in the best-of-five match with a 25-15 win.

Pair singled out the play of libero Cailey Ramaker and defensive specialist Foster.

"Cailey Ramaker, she's all over the place. She plays with so much heart and so much passion," Pair said. "Foster's really stepped into that role as a defensive specialist."

Ramaker had 15 digs. Foster, Polanski and Brye, each had seven digs.

Biocic called time with the Lady Tigers down 23-19 in the third set and they rallied. Kendall Pickett (dig), Vertz (set) and Burton (kill) combined for a point. Vertz served an ace and Farmington hit long prompting Pair to call time holding onto a 23-22 lead.

"Prairie Grove competed hard. There was not one time that I looked over and thought they were going to quit. Sometimes that's hard to do," Pair said. "But I'm definitely happy with the outcome tonight."

Pair set up a brilliant play, disguising the hitter so Prairie Grove wouldn't recognize where the attack came from with a front line player ducking at the last moment and a player stepping in behind her to play the ball over the net. The ploy worked beautifully, bringing Farmington to match point at 24-22, but Prairie Grove refused to go away quietly.

Burton's kill found an empty spot on the back row, then Farmington played the ball right to senior Kenleigh Elder, who saw it coming and smashed home a kill to even the score at 24-24. Elder finished with six kills.

"Elder played great offensively. She saw the block and hit around the block, playing aggressively which is what we want her to do," Biocic said.

Prairie Grove wasted a chance to take the lead with a serving error to go back in front, 25-24. Kaiser finished off the Lady Tigers with a kill providing Farmington a 2-point margin to claim a 26-24 victory and take the match three games to none.

"If we can clean things up, I think we can be a real competitive team this year," Biocic said. 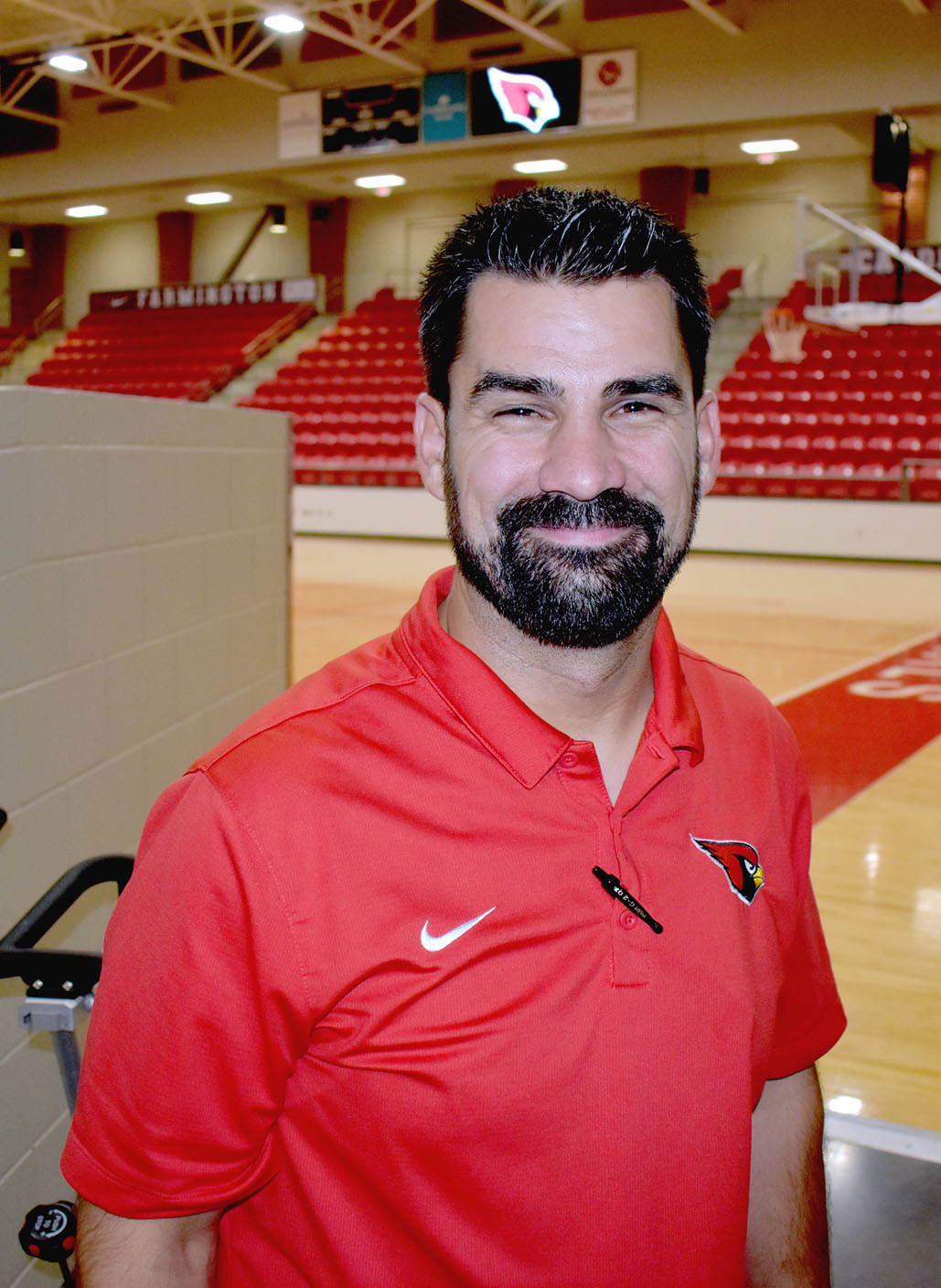 MARK HUMPHREY ENTERPRISE-LEADER/Farmington head volleyball coach Greg Pair is optimistic about the season with players finding their roles with some switching positions and others taking the spot of graduated starters from last season.