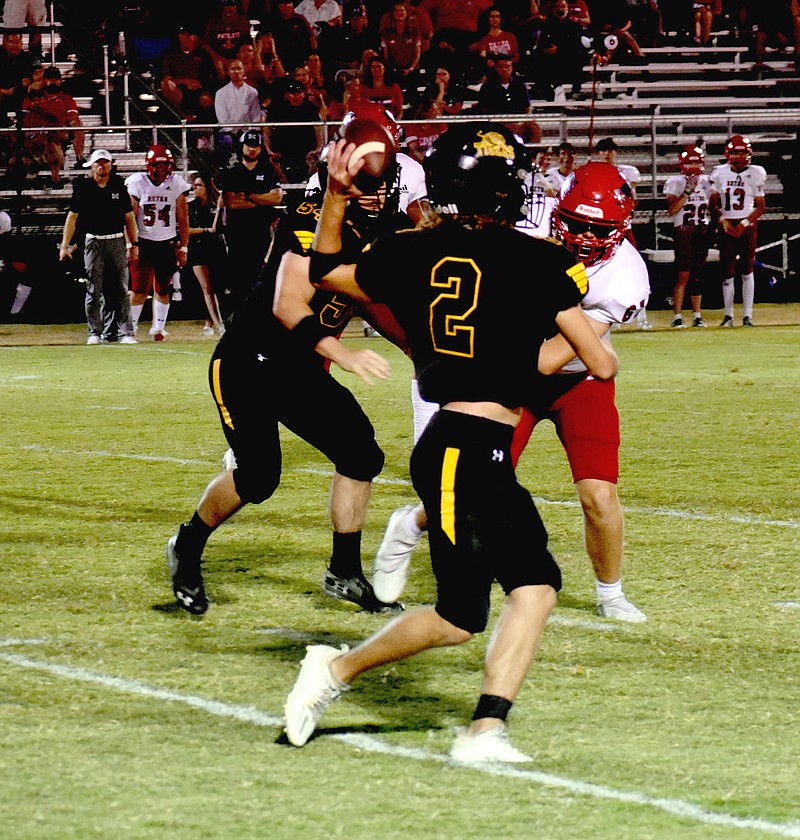 MARK HUMPHREY ENTERPRISE-LEADER/Prairie Grove junior backup quarterback Luke Vance makes a difficult throw with his left hand while moving to his right. Bannon completed a 28-yard pass to David Stephens to convert second-down-and-8 while leading the second team offense on a 14-play, 80-yard touchdown drive capped by a fourth down 10-yard scoring pass with 35 seconds remaining. Prairie Grove sustained a 41-21 to Tulsa Metro Christian in the Tigers' final nonconference game. Prairie Grove begins its first season of 5A West play this week on the road at Pea Ridge. Kickoff is set for 7 p.m. at Blackhawk Stadium.

"We returned the kickoff and get an impression that these guys aren't ready and it didn't look like they were really ready to go at it to me either, so we're not just going after them. We're not going after them hard and that gives them the impression that 'these guys aren't going very hard, let's get them,' and so now we're playing catch-up for a big part of the game," Abshier said.

The Patriots may have four Division I players on their roster and they played like it.

Metro Christian scored on its first two drives of 75 and 80 yards, dominating time of possession to take a 14-7 lead at the end of the first quarter behind the passing of quarterback Kirk Francis, who completed 30-of-40 passes for 361 yards and 5 touchdowns. Francis (6-2, 185) hit Breck Nauman for a 20-yard touchdown to cap the Patriots' first drive and Jaxson Grimes for 26 yards for Tulsa Metro Christian's second touchdown.

"Obviously, everything runs through Kirk. He's got tremendous weapons to throw to. We've got a front up front of him that keeps him clean in the pocket, but his skill to distribute the ball to so many different kids week in and week out is one of the things that makes Kirk good. The other thing is he's been playing since he was a sophomore," said Metro Christian head coach Jared McCoy.

Francis helped the Patriots win a state championship two seasons ago when he burst on the scene as a sophomore. His mobility enabled him to keep plays alive and find a secondary receiver on many plays.

"That quarterback, he's good. They do a lot of things right. We knew they were disciplined coming in, the other team was, and we didn't produce our discipline like we should have," Abshier said.

Prairie Grove punter Joe Sims (6-2, 230) got off a booming 50-yard kick for a touchback in the first quarter, and another punt that traveled 46 yards before rolling out-of-bounds at the Patriots' 5-yard-line in the second quarter.

"That helped a little bit to slow them down some. It wasn't enough. We had too many other errors to stay in the game. They had our number," Abshier said.

The Tigers (2-1) unraveled with a pair of costly turnovers in the second quarter. A snap went over Sims' head and he was tackled at the Tiger 15 setting up a short field for the Patriots. William "Tagg" Campbell broke several tackles scoring on the next play. Campbell finished with 47 yards rushing on 8 carries.

Prairie Grove senior defensive end Matthew Velasco blocked the point after but the Tigers trailed 20-7 with 10:59 showing on the second quarter clock.

Two plays later the Patriot defensive line penetrated Prairie Grove's backfield causing a fumble on a double-handoff. The Patriots recovered at the Tiger 21 and licked their chops eyeing another short field. Four plays later Francis connected with Will Bierman, who broke tackles on a 12-yard scoring reception to up the visitor's lead to 27-7 with 9:36 remaining in the first half.

"As far as our defensive line goes, we really have kids that are 6-feet, 6-1, 205 to 215 pounds. I think we've got one of the big boys who is 6-3 and 215, but those guys are like linebackers down there on the line of scrimmage. So they get flat down the line of scrimmage, they pursue and run to the ball. They're game-changers," Jared McCoy said.

Prairie Grove garnered some momentum in the last four minutes of the half with two defensive stops and a critical 2-play, 46-yard drive for the Tigers' only offensive touchdown of the half. David Stephens recovered a Patriot fumble to give Prairie Grove possession in Patriot territory at the 46. Senior Tiger quarterback Camden Patterson connected with Sims playing wingback for 27 yards. On the next play, Ethan Miller broke a 19-yard run to paydirt off left tackle. Cale Bray booted the PAT narrowing the gap to 27-14 with 3:09 left in the first half.

The Tigers attempted an onside kick but it went out-of-bounds. With a 5-yard penalty marked off, Tulsa Metro Christian took over at its own 47. Francis ran a quarterback draw for 13 yards and completed a pass to Grimes for 16 yards and a first down at the Tiger 18. The Tigers made a stand forcing a turnover on downs. Corbin Bowlin held a run to a 1-yard gain on first down. Miller dropped a Patriot running back for a 5-yard loss after a catch on third down and Velasco rushed Francis forcing an underthrown incompletion on fourth down.

That was an improvement defensively after the Tigers gave up 191 yards and four touchdowns on the Patriots' first four possessions. The Tigers were also better offensively, picking up 72 yards on their last two drives of the first half before running out of time after reaching their own 46.

They couldn't sustain that momentum. Tulsa Metro Christian racked up 453 yards of total offense with Francis finding eight different receivers. He threw to Reid Roth (6-0, 190 pounds) for a 9-yard touchdown that opened up a 34-14 lead for the visitors at the 9:42 mark of the third quarter. Roth had 9 catches for 124 yards, Nauman gained 64 yards on 7 receptions, and Grimes' 3 catches went for 69 yards.

The Tigers had trouble running the ball, managing 133 yards on 37 attempts, and hurt themselves when Miller's 49-yard jaunt to the end zone after he reversed field and sprinted past everybody got called back by a block in the back penalty. Miller eked out 31 yards rushing on 9 carries while fullback Coner Whetsell rushed for 50 yards on 11 carries.

Following an exchange of punts, Prairie Grove drove 42 yards to the Tulsa Metro Christian 21, but the drive stalled and the Tigers turned the ball over on downs at the Patriot 26.

Metro Christian scored on a Francis 6-yard pass to Seth McCoy to expand it's lead to 41-14 with 10:41 to play in the fourth quarter. Sims sustained an injury and had to be helped off three plays later.

There were some bright spots.

Prairie Grove junior backup quarterback Luke Vance demonstrated his athletic ability, making a difficult throw with his left hand while rolling out to the right to complete a 28-yard pass to David Stephens on second-down-and-8. Vance lead the second team offense on a 14-play, 80-yard touchdown drive that featured Jace Edwards' 9-yard carry. Vance was 3-for-3 on the drive that was capped by a fourth down 10-yard scoring pass to Edwards with 35 seconds remaining.

"Almost everybody's healthy [except maybe] Joe Sims. We wanted to get out healthy out of this one," Abshier said.

Prairie Grove begins its first season of 5A West play this week on the road at Pea Ridge. Kickoff is set for 7 p.m. at Blackhawk Stadium. 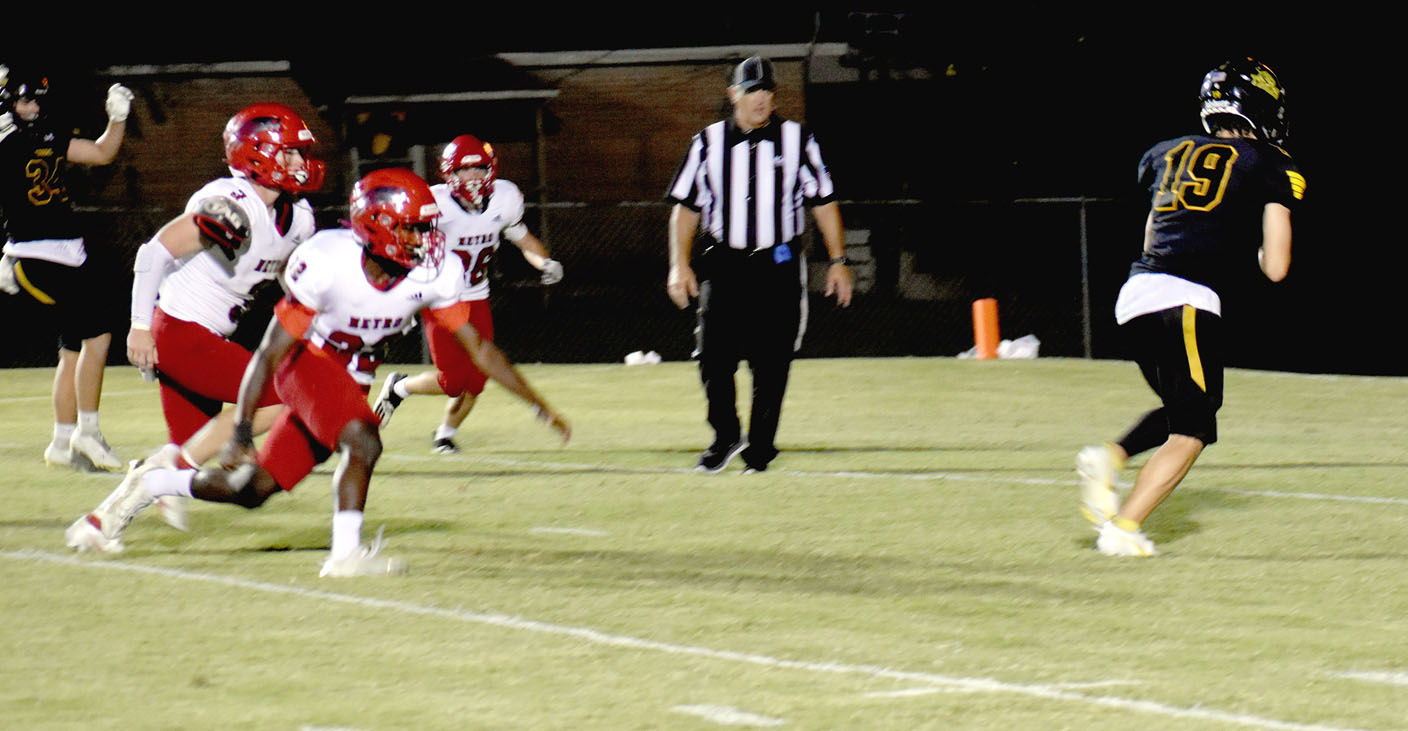 MARK HUMPHREY ENTERPRISE-LEADER/Prairie Grove sophomore Jace Edwards got wide open to catch a 10-yard touchdown pass from Luke Vance on fourth down with 35 seconds left to cap a drive by the second team offense. The Tigers lost 41-21 to Tulsa Metro Christian in their final nonconference game. They begin their first season of 5A West play this week on the road at Pea Ridge. Kickoff is set for 7 p.m.