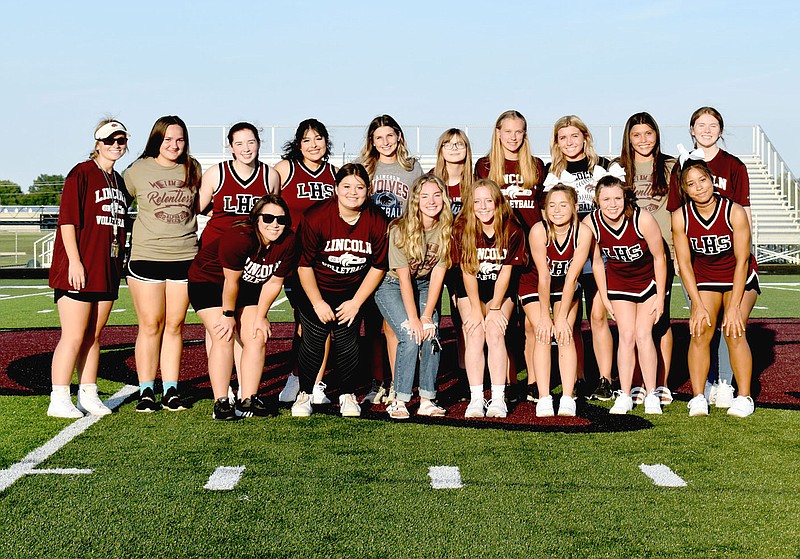 MARK HUMPHREY ENTERPRISE-LEADER/Lincoln's varsity volleyball team was introduced to hometown fans during the Fall Edition of "Meet the Wolves" held in August.

LINCOLN -- Union Christian diverted momentum away from Lincoln after game one and took three straight sets to hand the Lady Wolves a 3-1 volleyball loss at Wolfpack Arena Aug 24.

Lincoln opened the match serving four straight aces, then used a block-kill along the front line to grab an early 5-0 lead in the first set. A bad pass allowed Union Christian to interrupt the surge, but Lincoln quickly got back in the flow, getting a kill from its middle hitter and another from Brinkley Moreton playing outside hitter. Two more aces sandwiched around an Eagles' time-out continued Lincoln's run that didn't end until Moreton chalked up another kill to make it 11-1.

The teams traded points before Lincoln used a two-handed push to land to the ball in right corner and stretch its lead to 15-4. Union Christian then managed a run of its own, three of the next four points, trimming the Lady Wolves' lead to 16-7.

The set appeared almost over on a Union Christian serving error, putting Lincoln at game-point leading 24-12, but the initial call was reversed, changing the score to 23-13. The Eagles served back-to-back aces, prompting a time-out by Lincoln coach Brittany Engel. Lincoln got a break on the next serve with Union Christian whistled for a violation. Now, the Lady Wolves were at game-point, holding a 24-15 lead. Union Christian could not handle a strong serve that was not returned and Lincoln claimed the first set, 25-15.

The match went downhill from there for the Lady Wolves although they had their chances. Union Christian jumped out to an 11-2 advantage in the second set. Lincoln shook off the doldrums and responded by forging a 6-1 rally, spurred by a pair of aces and two cross-court kills executed across the front line.

Union Christian still held a 12-9 lead but Lincoln kept the heat on, forcing miscues. The Lady Eagles hit long, allowing Lincoln to pull within a point at 14-13. Union Christian called time-out and took control of the set with a 9-1 run.

A Lincoln dig went over the net, surprising the Lady Eagles. That kick-started seven unanswered points by the Lady Wolves but they were too far behind. A desperation save cleared the net for Union Christian, bringing them to game-point at 24-21. Lincoln scored the next two points but a Lady Eagle dig found the right corner on the back line and Union Christian won the second set, 25-23.

Lincoln couldn't capitalize after taking an 8-3 lead in the third set. The Lady Eagles stormed back to tie the set at 17-all. Moreton ended a 9-3 Union Christian run with a kill from the right hitter position and later served an ace to give Lincoln a two-point cushion of 20-18. The Lady Wolves held one more two-point lead at 22-20 but surrendered the last five points to drop game three, 25-22, giving the visitors a 2-1 lead in the best-of-five match.

Lincoln temporarily overcame a 5-2 deficit in the fourth set. The Lady Wolves scored five straight points, four on Moreton aces to move in front, 10-7. Lincoln held leads of 15-12, 17-14 and 19-17, but couldn't hold off the Lady Eagles. Union Christian smelled victory, outscoring Lincoln 10-6 down the stretch to avoid going into a fifth set tiebreaker and won 27-22.