ASTRONOMY: Pleiades a sight to see in January 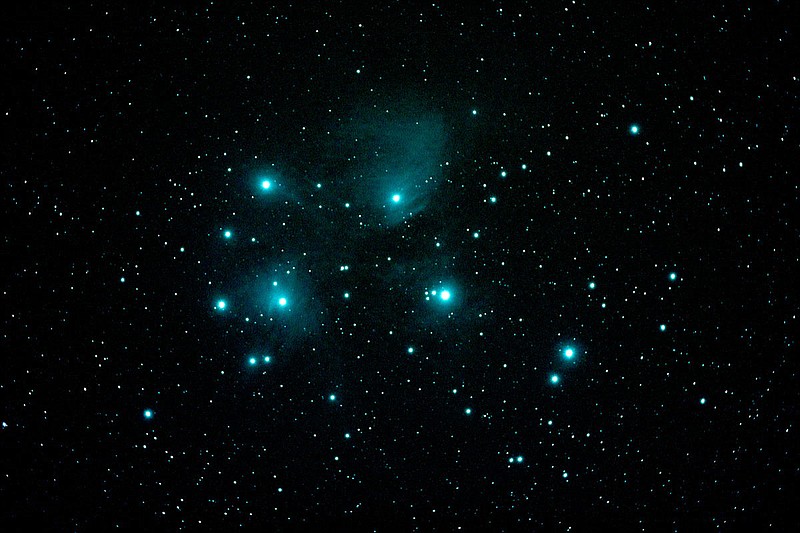 The Pleiades is a group of young, blue, very hot stars visible on the eastern horizon in the January night sky.

Sometimes, the things I write about are a bit difficult to see, especially if you are new to skygazing. For this column, the first of the new year, I will talk about something anyone with normal vision can see during this winter period -- the Pleiades.

The Pleiades is a great naked eye object and seeing it is greatly improved by using any binoculars. About 8 p.m., face directly east. At about 35 degrees up from the eastern horizon, you can see Mars, that bright 'star' with the tawny appearance. This isn't a star at all but Mars, the fourth planet out from the Sun. It happens to be close to the Earth now so it is quite bright. Continue up in the sky to about 45 degrees above the horizon and you will see a little cluster of stars, grouped together. These are the Pleiades, or, the 'Seven Sisters.' There are various versions of the mythology about the Pleiades. In one version, Orion the Hunter, rising lower down in the eastern sky, is chasing the Seven Sisters. However, he has to be careful because, nearby, Taurus the Bull is a threat. So, for Orion, is it best to chase the Seven Sisters or hunt the Bull?

Astronomers believe the Pleiades is a group of young, blue, very hot stars that formed at about the same time. (Using binoculars, one can see many more stars than with the naked eye -- this is a true cluster.) These stars have a motion across the sky, a 'proper motion' that, over time, will result in a change of position in the night sky. This motion is very slow from our perspective and it will take eons before a human could see a positional difference.

Another thing that makes the Pleiades special is that in this era, it appears to be moving through an enormous cloud of dust, many light years across. Some of this dust may have been part of the material that formed the stars in the first place. Alternatively, the stars may have already formed when the cluster started to encounter the cloud of dust and now the stars are embedded in it.

You can't see the cloud of dust with your eyes or binoculars. However, time exposures of the cluster reveal a wispy, blue cloud, with streamers, surrounding the cluster. Why is the dust cloud blue in time exposures? First of all, as noted above, the cluster stars are young and hot and these kinds of stars are inherently blue. The wispy dust is blue because it reflects the blue light from the stars. Another factor comes into play, however, to make what we see look blue. Interstellar dust absorbs red wavelengths of light. It also lets the blue wavelengths pass through. Thus, the dust acts as a sort of 'strainer' or filter, letting us see blue.

Look up the Pleiades on the Internet. There, you will find many fine photographs of the Pleiades. Some will have been made by amateurs. Many of the images are long enough so that the whole star group is completely bathed in the luminous, blue dust.

I have included an image of the Pleiades I made with a 4-inch telescope. It is only a long enough exposure that begins to show the luminous dust. More dust would show if I had made a longer exposure but it was quite cold and I can only take cold, such as it was, for a short time. If you go out to see the Pleiades, put on your heaviest winter clothes. The eyepieces of your binoculars will assume the ambient temperature and your eyelids can get quite cold--be careful!

A New Year is sort of a blank slate in the affairs of humans. If you want to get into skygazing, now would be a good time to start. If you really get into it, by the same time next year, you will have seen all the seasons of the sky, each with its own particular kind of wonders. Get out there and look at the free wonders!

-- Dr. David Cater is a former faculty member of JBU. Email him at [email protected] The opinions expressed are those of the author.