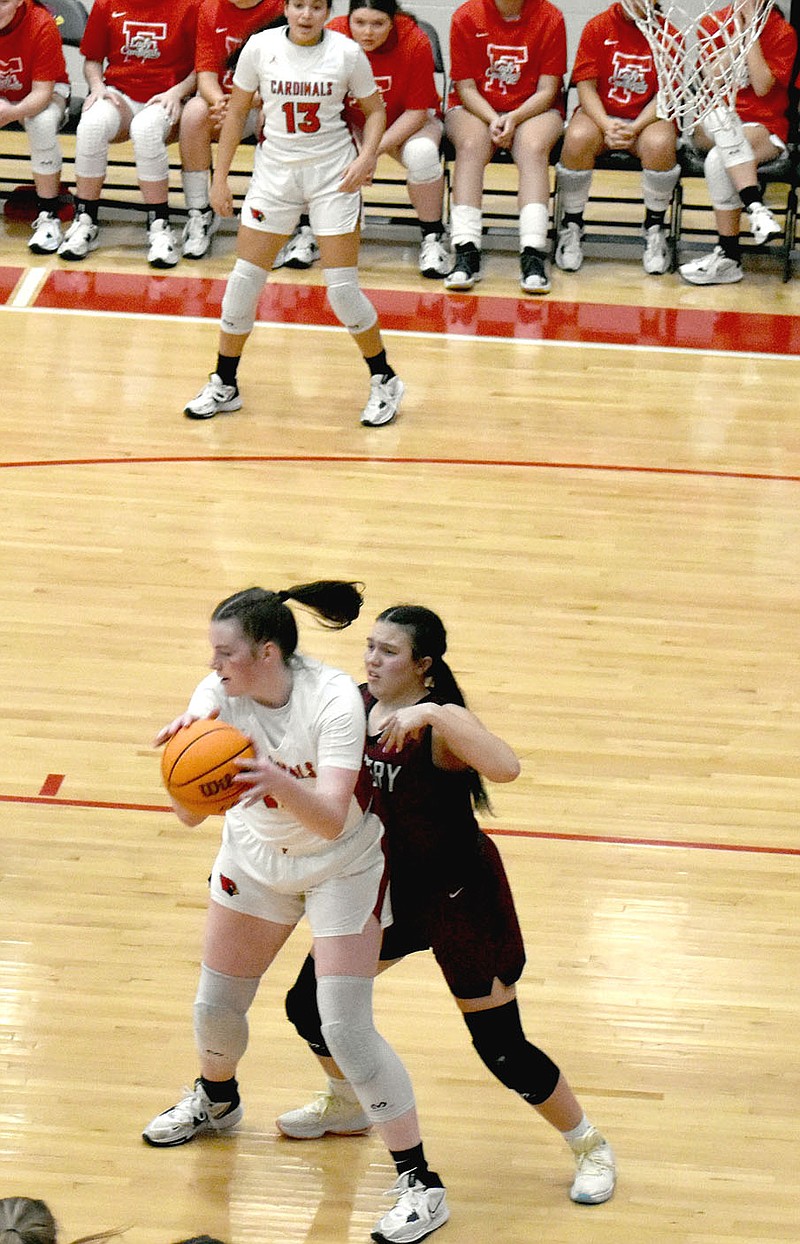 Mark Humphrey/Enterprise-Leader Farmington sophomore Zoey Bershers posts up against a shorter Gentry defender. The 6-feet-3 center scored a team-high 16 points to lead Farmington to a 56-37 win over the Lady Pioneers on Friday as the Lady Cardinals celebrated Colors Day.

FARMINGTON -- Gentry's execution of its game plan went a long way toward sharpening Farmington even if the Lady Pioneers couldn't manage to pull out an upset and lost 56-37.

The Lady Cardinals celebrated Colors Day Friday, with Razorback commit Jenna Lawrence crowned queen, but found themselves laboring to fend off the only league team to remain competitive against Farmington into the fourth quarter thus far this season. Reese Hester hit her fourth 3-pointer to pull Gentry within 41-33 with 5:22 left in the fourth quarter but she wouldn't make another trey and Farmington sealed the game with a 15-4 run, transforming defensive stops into offensive opportunities.

"We just kind of stayed patient. I don't think we felt like we were shooting the ball well but we were putting the ball in different spots. In the second half we got the ball in the interior, just kind of went to work and played off of it," said Farmington coach Brad Johnson. "You always worry sometimes in a game like that cause it's been awhile since we had a real close one. Can you gut it out? Are you going to get frustrated? Is panic going to show? And they didn't. It was a very mature effort. Obviously Zoey [Breshers] went to work on the interior. We got loose on the back side a few times. Moss hit a three. Jenna got loose finally, hit some shots."

Gentry played well, knocking down a trio of 3-pointers in the first quarter to pull within 10-9 after falling behind, 8-3. Alyssa McCarty, Reese Hester and Destiny Reinhardt each connected from long range.

Bershers, Farmington's 6-feet-3 sophomore, scored five of her team-high 16 points in the first quarter. She opened the scoring with a three and later added a putback. J'Myra London also hit a trifecta and Reese Shirey took a Marin Adams' deflection to the basket.

Reese Shirey blocked a shot out of bounds and Gentry inbounded underneath its own basket with 2.4 seconds left in the first. Bershers rejected a 3-point attempt out and the Lady Pioneers inbounded again with 1.3 seconds to go from the side. Alyssa McCarty, who paced the Lady Pioneers with 16 points, got free and caught a lob in front of the basket. She scored at the buzzer as Gentry took an 11-10 lead.

Farmington employed a triple tower look with Bershers, Lawrence and Kaycee McCumber on the front line along with the 5-feet-11 Adams playing guard. Brynn Cordeiro got a step but couldn't convert over the outstretched arms of the 6-feet-1 McCumber. After several trips up and down the court that included a miss by McCarty going to the basket, Shirey dumped the ball off to McCumber. She missed initially, then scored with the stickback to push Farmington back into the lead at 12-11 with 6:50 remaining in the second quarter.

The Lady Cardinals' length bothered Gentry, taking away the Lady Pioneers' bread and butter. Gentry thrives on scoring off drives but found those shots awkward and contested. Lawrence rebounded after forcing a Reinhardt miss, then brought the ball down and set up Hannah Moss' triple from the left corner.

Gentry benefited from a number of no calls. Breshers got hammered and tried to pass out of a triple team on the low block. The ball got slapped away resulting in a turnover. The team foul count stood at 7-to-1 in favor of Gentry playing on the road when McCarty sank 1-of-2 at the 2:21 mark.

Lawrence got her first basket of the game by rebounding a missed three, then powering up for a layup with 1:52 showing. Moss had inside position, wrapping both hands around a rebound with Emma Tevenbaugh climbing her back after missing a shot. Somehow the officials awarded the foul to Moss, her second, and sent Tevenbaugh to the free-throw line for a 1-and-1. That made the foul count 8-to-1.

Emma Tevenbaugh made both, cutting Farmington's lead to 17-14. Breshers got undercut while pursuing an offensive rebound on Farmington's next trip, but there was no foul called.

Still, Gentry could not make shots. McCarty missed on a contested back door cut. Lawrence rebounded and dribbled into the front-court. McCarty ran through her with Kaitlyn Caswell taking out Lawrence's legs as she fired up a 3-point attempt.

This time whistles sounded. Caswell was called for a foul, sending Lawrence to the free-throw line for three shots with no time showing in the second quarter. Lawrence missed the first, then sank the second, at which point the Gentry squad headed for the locker room. Officials made them return to the court. The distraction ploy failed with the ball bouncing around and falling through to give Farmington a 21-14 halftime lead.

Farmington's 16 points offset Gentry's best offensive production of the contest with 13 points in the third quarter. A 24-6 run by the Lady Cardinals began in the second quarter and extended until the 3:08 mark of the third when Lawrence got a shot to fall while absorbing a foul. Her basket gave Farmington a 34-17 lead.

Gentry rallied with a 10-3 run to keep the margin at 10. Farmington led 37-27 going into the fourth. The Lady Cardinals traded baskets with Gentry until scoring 10 straight points. Breshers scored at the rim off London's lob, next Lawrence converted a layup off a long outlet, then after Hester missed a three, Lawrence rebounded, brought the ball up and nailed a trifecta. Moss' steal led to Adams' triple, which gave Farmington its largest lead of 53-33 with 1:12 left.